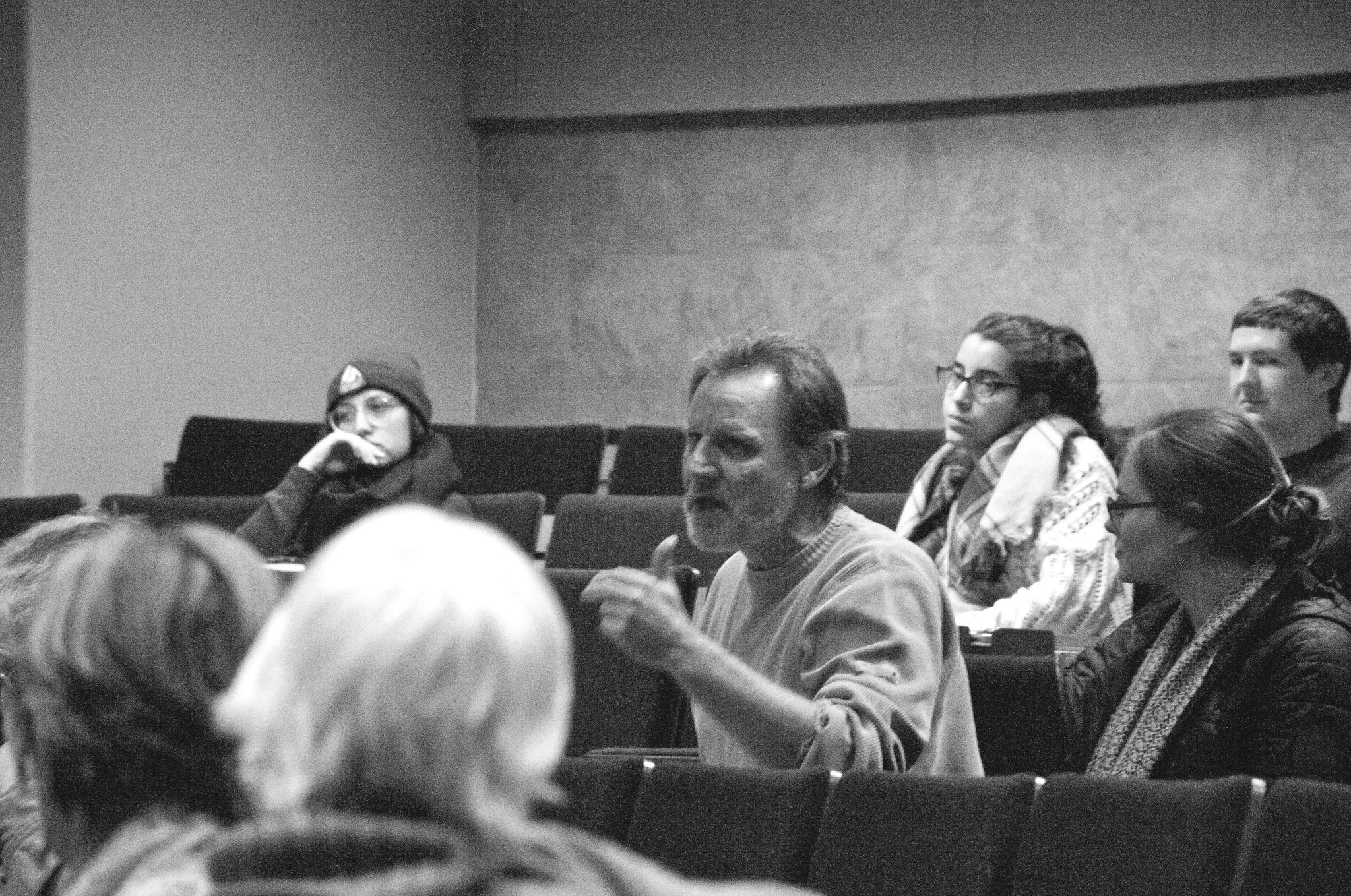 The Mount Allison environmental issues committee and the department of geography and environment moderated this panel in conjunction with climate change week.

“Tonight’s event is built on campus conversation on divestment,” said Tim Reiffenstien, the panel’s moderator. “Divestment is defined as the decision that institutions make to exclude fossil fuel investment from financial portfolios.”

The panel began with five-minute introductions from each panelist. Alex Lepianka, third-year economics student and Mount Allison Students’ Union vice-president finance and operations, also sits on the environmental issues committee and was chosen to represent DivestMTA at the panel. Lepianka described DivestMTA as a group of student activists fighting for climate justice.

“While the focus on DivestMTA is about getting Mt. A’s endowment out of the fossil fuel industry, the spirit of our movement is one of justice,” said Lepianka.

Mt. A Vice-President Finance and Administration Robert Inglis represented the administration for the panel. Inglis outlined Mt. A’s investments, which he said are comprised of four different bundles of investment. The first, endowment funds, are valued at approximately $170 million. Inglis said that Mt. A does not own stocks within all of these endowment funds, but rather owns funds and funds to funds. Funds to funds are most easily described as an investment strategy which is based on holding a portfolio of other investment funds as opposed to investing in stocks directly. “We own probably 5,000 stocks in those funds,” said Inglis.

Inglis said that Mt. A has hired fund managers who work separately from the university who decide what the university invests in. “Robert Inglis doesn’t come into work every day and decide what to buy, and what to sell, nor does financial services,” said Inglis. The university’s other means of investment include different modes of pension plans and a chequing and bonds account.

Mt. A faculty were represented by professor Bradley Walters, the coordinator of Mt. A’s environmental studies program, and Stephen Law, head of the economics department.

Walters discussed his support for divesting from fossil fuels and saw it as a first step to pushing the government and their policies to more seriously consider environmental impacts.

“If enough people are [divesting], it will have consequences,” said Walters. “Everyone will hear about it, it will be a nationwide statement from a body that is supposed to represent the interests of the enlightened view of the world and something that is supposed to reflect the interest of the younger generations that it is teaching and mentoring.”

Law also spoke to the economic benefits of divesting. Law said investments in the fossil fuel industry will become less valuable and repeatedly called investing in oil “risky.” The risk factor of oil investment is fundamental to understanding the issues of divestment at Mt. A. Inglis has repeatedly said that Mt. A looks to minimize any risks associated with their investments.

“As fossil fuels become more risky, any sensible investment manager is going to want to hold less of them if what they’re trying to do is reduce risk,” said Law. “The question is not whether [to divest], but when and how.”

The next portion of the panel discussion entailed a semi-structured interaction among the panelists. A large portion of this discussion and subsequent debate began when Inglis said, “Mount Allison is a mission-based institution […] the university’s mission, I believe to be, is fostering teaching and learning in undergraduate research.” Inglis continued by asking the panel if solving fossil fuels to promote social justice is part of the university’s mission.

Walters responded to this question quickly, and said: “To me, the climate problem is so serious that anybody in any role, in any institution […] has a moral responsibility to act on it as much as it is capable.”

Walters also said asking questions regarding the university’s mission is, in a way, irrelevant because of the seriousness of the threat of climate change.

“What is the teaching and learning that we wish to support at this institution?” said Lepianka, posing another question in response to Inglis. This question went unanswered.

Within this discussion Walters also said he believed donors would throw money at Mt. A “by the bucketful” if Mt. A were the first Canadian university to divest. Walters said this would make it so that the university conveyed the message that they believed in students, alumni and their children’s futures.

In response, Inglis said, “I’m sure there are donors who would be interested in that, and I know there are donors that have told me, ‘I gave my money for a scholarship, nothing else. If you divest, I’m going to be upset.’”

The most heated debates followed in the third section of the panel, which surrounded audience and social media comments and questions.

A question from the audience asked: “What kinds of pressure might occur on the campus which would move Mt. A to divest?” This elicited responses from the panelists about the nature of evidence.

Inglis said he hoped the university would make evidence-based decisions which would be backed by sound research and due diligence. Inglis also argued that the university could not use non-financial criteria to constrain what he called the “financial investment universe.”

Lepianka brought into question what constitutes evidence for divestment. “To say evidence takes the form of risk-and-reform metrics is to discount the lived experiences of people around the world who are actually suffering from our risk and return,” said Lepianka. “How we come to make these decisions excludes certain voices from this table.” Earlier in the talk, Lepianka pointed out that the panel consisted of “three white men talking about money,” pointing to the exclusion of marginalized voices and the voices of those affected by the fossil fuel industry.

Inglis, in response, asked Lepianka, “If we were to divest, would any of these experiences of those people change?” There was an audible sense of shock following this question and fourth-year student James Beirne left the panel immediately after hearing this question.

Beirne said he left because “[Inglis’s] question and tone were so disrespectful to Alex [Lepianka] and the divest movement. The implication was that if Alex [Lepianka] couldn’t prove a causal link between Mt. A’s investments and damage done to specific individuals in the global South, then divestment wasn’t even worth considering.”

“I cannot believe you have to say something like that. I am sitting here in a university listening to one of my senior administrators saying that issues of morality are not a concern of a university,” said Griffiths. “We have spent time and money talking about leaderships and what you’re suggesting is that it’s not our problem, whatever we do won’t matter […] I am astounded that you will make these kinds of comments and that more of you have not raised your voices about this – this is apathetical.” Griffiths’s comments were met with a wall of applause from the audience.

Griffiths again responded to Inglis and said, “Here we are an institution of higher learning, and we have an opportunity to be a leader.” Griffiths was again met by applause from the audience. He continued, “I understand we have financial practicalities. What we’re talking about is: Let’s find a way to do it.”