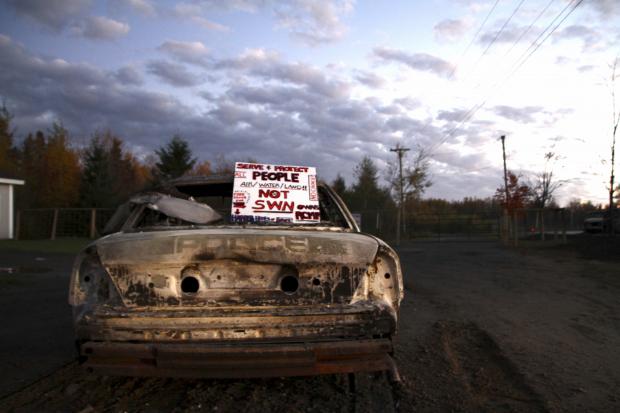 Approximately fifty anti-fracking protestors gathered above the Trans-Canada highway last week, where they hung banners for vehicles passing below, and waved signs at motorists passing along Main Street, many of whom blared their horns in support.

The protest was organized by the Tantramar Alliance Against Hydrofracking (TAAHF). Their ranks on the overpass were bolstered by a number of Mount Allison University students, who made up an estimated half of the demonstrators.

TAAHF would like to see a ban on hydraulic fracturing—colloquially referred to as hydrofracking, or simply ‘fracking’—for shale gas in New Brunswick, citing the potential negative health implications for local water supply. Premier David Alward’s Conservative government has ruled out a moratorium on fracking in the province.

The protest was part of an international “Global Frackdown,” which saw protests in dozens of countries around the world. The CBC reported that similar demonstrations took place in Bouctouche and Moncton.

The October 19 protest also happened to coincide with an RCMP crackdown the day before on a protest near Rexton, New Brunswick. Hundreds of RCMP officers were brought in on the morning of October 18 to enforce an injunction to end the blockade of a compound where Houston-based gas company SWN Resources was storing equipment for shale gas exploration. Elsipogtog First Nation had issued an eviction notice to SWN on October 1. Native and non-native activists had been barricading the compound since September 30.

In the ensuing chaos at Rexton, forty people were arrested, including Elsipogtog Chief Arren Sock. Five police vehicles were burned. Sock and Alward have since agreed on a week-long “cooling-off period” to negotiate.

Many of the demonstrators at the Sackville protest said they turned out not only to show their opposition to fracking in New Brunswick, but also to show solidarity with Elsipogtog First Nation.

“I’m here not only because I oppose fracking, but also because of what happened near Rexton a couple days ago. I’m pretty strongly opposed to what the RCMP did,” said Remi Collete, an Mt. A student.

In the wake of the violence at Elsipogtog, Alward re-emphasized his commitment to the establishment of a shale gas industry in the province. “My hope and my confidence is that we will see a shale gas industry develop in New Brunswick,” Alward told The Globe and Mail on Monday. “We can’t afford otherwise.”

“[Many people] don’t understand that we won’t necessarily have a lot more jobs, and that jobs might be short-lived,“ said Mitton. “Our water, our air, will be damaged. It’s not just risks, it’s what will happen.”

“The government of New Brunswick has really underestimated the nature of the opposition they face on this issue,” said Brad Walters, an environmental studies professor at Mt. A who attended Saturday’s protest. “They’ve failed to consult in good faith with anybody.”