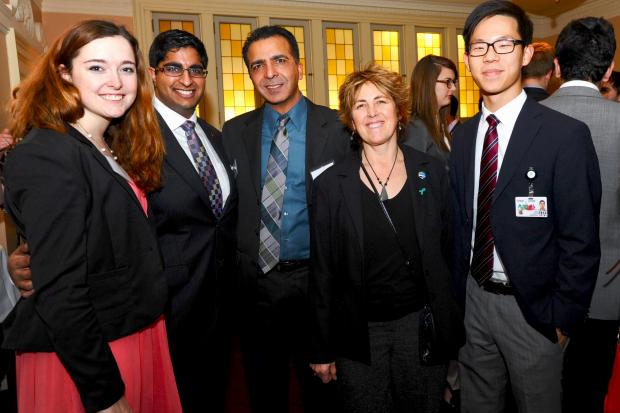 Sackville and Fredericton—Mount Allison Student Union President Melissa O’Rourke and Vice-President External Affairs Ian Smith travelled to Ottawa as part of The Canadian Alliance of Student Associations (CASA) Advocacy Week. During advocacy week, CASA representatives from across the country spoke to 120 Members of Parliament on behalf of 300,000 students represented by CASA.

“The UPEI Student Union thinks it’s an important part of what CASA does, connecting students to decision makers and making sure that our words have impact on the hill,” said Travis Gordon, vice-president academic and vice-president external for the University of Prince Edward Island Student Union.

Though students will typically be matched up with members of parliament from their area, they will be presenting the same unified policy suggestions created by the membership. O’Rourke said that the topics for lobbying were decided at a CASA meeting in June at a Policy and Strategy Meeting in Alberta, a meeting attended by Smith. O’Rourke and Smith brought forward issues of stigma around mental health. O’Rourke said, “Mental health was one of the huge tings we decided we were going to work on this year during advocacy week.” O’Rouke said they put forward a request to “have an extra 4.5 million dollars put towards the Mental Health Commission of Canada to have them create campaigns and do some lobbying on campus.”

The big issues on CASA’s agenda this year include a focus on student assistance (including further increasing the in-study income limit), indexing student loans to inflation, and off-campus work visas for international students.

With several national directors for the organization coming from the Atlantic provinces in previous years, Matthew Rios, president of the Acadia Students’ Union, said the Maritime region has a strong voice in lobbying at the federal level.

“Atlantic schools have continued to have what I would call a disproportionately strong voice in terms of our advocacy in general,” Rios said. “We have a very strong voice at the federal level and I think that reputation and tradition of excellence is something … we need to maintain.”

CASA takes a policy and research approach when it comes to advocacy, one that members argue is effective.

Some of CASA’s successes include a variety of education-related tax credits, various student grants and changes to in-study income on federal loans and an open access policy for publicly funded research.

O’Rourke said that the response from politicians was positive. Noting “immediate feedback was really great and there were a lot of people who said they wanted to support [CASA].” She also added that most MPs were very responsive and a number of post-secondary issues were raised during the Parliamentary question period.