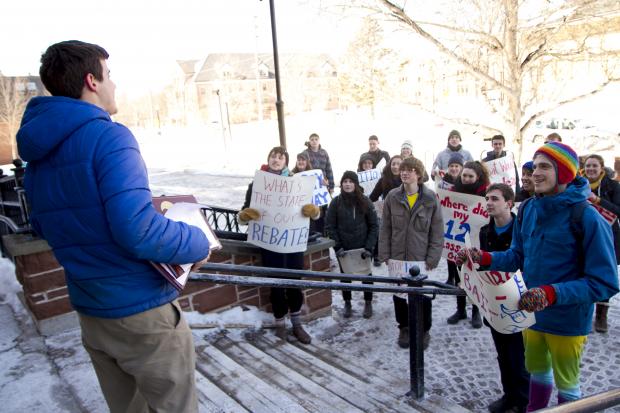 In the wake of the three-week faculty strike at Mount Allison University, some students are demanding their money back. Approximately twenty-five students marched across campus last Friday and visited the registrar’s office asking for a firm commitment to reimburse students for lost tuition dollars.

Meeting in Gracie’s on Friday, March 7, protest organizer Alex Thomas addressed the crowd. “Our message is simple: the university should not profit from a situation in which students incur a significant loss of a service which we paid for in full,” he said.

Thomas indicated the protestors supported a recent Mount Allison Students’ Union (MASU) submission to the administration, sent to students on March 3, requesting a tuition rebate to make up for lost instructional time during the strike. Thomas said the immediate goal of the protest was to have a commitment by the administration “to pass on all savings due to the strike to students.”

The student union voted against supporting the demonstration, citing poor timing, as the event coincided with the university’s annual open house to recruit incoming students.

The demonstration was specifically intended to coincide with the open house, with the organizers aiming to increase the audience exposed to their message. Responding to concerns about the demonstration potentially damaging the university’s reputation, Thomas said, “I don’t think anyone who saw our demonstration would be any less likely to come to Mount Allison. We greeted people we saw with smiles, and they greeted us with smiles.”

Smith said MASU had made their stance on a tuition rebate clear with their proposal. “Our biggest issue with this protest is that it was taking place on the day of the open house,” he added.

According to the MASU submission, the university saved “approximately $856,948 in tenure [sic] faculty wages” during the three-week strike. The student union suggests this money, and other savings, “should provide the University with ample opportunity to compensate students for services not rendered during the strike period.”

University Vice-President Student Affairs Ron Byrne indicated that the protest caused minimal disruption, and was particularly conscientious of and polite to the employees of the registrar’s office. “[The protest] was done respectfully, it was done appropriately, and I think […] they were obviously sending a positive message that they wanted us to hear,” he said.

Addressing a potential rebate, Byrne said that it was premature to declare what sort of financial situation resulted from the strike, because the ongoing arbitration may result in the payment of professors and librarians who had their salaries withheld during the strike.

The administration and faculty association agreed to use binding arbitration on Feb. 16 to resolve outstanding issues on the faculty contract and to set the terms of back-to-work protocol, ending the strike. The two sides have since agreed on a potential arbitrator, and have inquired about his availability.

Byrne indicated that any savings would benefit students anyway. “Whatever savings, if any, will be used by the university in a way that is going to support our students, both today and in the future. […] There are many things that will go in a calculation before we can figure out, whether there were any savings,” Byrne said.

Byrne said it was “premature” to make predictions about the likelihood of a rebate, and indicated that the process of determining whether there will be a rebate would involve deciding if such a rebate was financially possible, meeting and discussing it with MASU, and then presenting a proposal to the Board of Regents, with whom final financial authority rests.

Thomas is troubled by the administration’s response. “I sincerely hope that I’m wrong in interpreting [Byrne’s comments] as an indication that the university has no plan to [offer students] a significant tuition rebate,” Thomas said, referring to a March 9 CBC interview in which Byrne made similar statements on the subject.