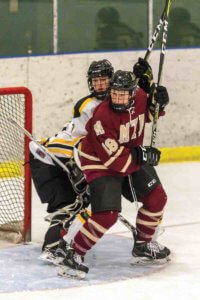 Abby Beale grew up watching the Mounties women’s hockey team, imagining what it would be like to play for them. A native of Sackville, Beale played hockey in the same arena as the the team throughout most of her childhood. Now in her first year of university, she calls herself a Mountie and wears the jersey with pride.

Not only is Beale finally playing for the Mounties, she currently leads the team in points. Warren Mason, the head coach of the women’s team, said, “Abby has had a very successful freshman season. Anytime a someone in their freshman year leads their team in scoring and plays in all situations, it has to described as a success.”

Describing her playing, Mason said, “Abby is an aggressive forward that uses her speed and strength to get to pucks and create possession. Her ability to control the puck in traffic and then get good shots to the net has created a lot of offense for our team. This has been very important for us this season.”

Beale commented on her experience as a rookie in the AUS: “I came in with an open mind but knew that there would be challenges that I’d have to face. I find the hockey faster, for sure, but it was a smooth transition.”

Along with this, Beale commented on how she’s been playing personally. “As a rookie, I have to make sure that I’m always on my game. I’m trying to remain focused and not to get ahead of myself,” she said. “If we’re not having a good game you just have to fight through it and not focus on things that we can’t control. I’m making sure to focus on the positives, pushing through and never giving up.”

Being from Sackville, Beale discussed how special it is to play here, and the benefits that come with it. “It’s nice being able to walk into the rink that I grew up playing in,” she said. “I’m beyond grateful to be able to have my family at every game. Both sets of my grandparents, my brother, parents, aunts and uncles and even friends in town are all able to support me.”

The Mounties have struggled this season, but Beale remains positive for the future, with three years remaining before she graduates. “As a team, we have to make sure that we’re all on the same page and in the same mindset,” she said. “We have to prepare for players to graduate and new players coming in.”

“The goal is for Abby to continue to develop as a hockey player,” said Mason, commenting on Beale’s personal future and her potential as an individual player. “She has demonstrated excellent growth as a player in her first season and the expectation is that she will continue to grow as an offensive and defensive leader in the coming years.”

The Mounties have two games remaining in the regular season, both on the road against St. Thomas and UPEI, finishing off the year on Feb. 10.