How setting the clock back an hour affects your health 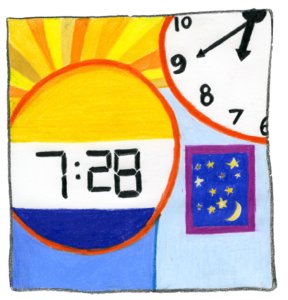 Last Saturday, Mount Allison students lost an hour of sleep and shifted their sleeping schedules as the clocks moved back an hour.

Dr. Genevieve Desmarais, a psychology professor at Mt. A who teaches courses on behavioural neuroscience, explained how daylight saving time affects the body’s mechanisms. “What changing our [sleep] schedule does is put our activities at odds with our circadian rhythms,” she said. “These rhythms are in fact patterns of body temperature, hormone levels and drowsiness that vary throughout the day.”

The patterns are reflected by the body temperature dropping in the evening and rising in the morning, as well as melatonin fluctuations. “Our body accumulates melatonin throughout the day, and it is at its maximum level in the evening when we go to sleep,” Desmarais said. “That’s why sometimes [melatonin] is used as a supplement to help fall asleep.”

One of the main reasons daylight saving time has an effect on the body’s biological and psychological processes is due to the abruptness of the change, Desmarais explained. “You can think about it this way: our circadian rhythms are affected by light, and the natural changes in lighting over the seasons will gradually change our rhythms,” she said. “However, these changes are quite slow. With daylight saving time, you are initiating a massive shift in these rhythms; the body generally does not adapt that fast.”

Along with the effects caused by the haste of the change, daylight saving time causes a shift in people’s stable schedules. “When we set the clock back one hour and start waking an hour earlier and trying to go to sleep an hour earlier, we are trying to do these things at a time that is no longer optimal,” Desmarais said.

Research has demonstrated that in Canada there is a seven per cent increase in car accidents on the Monday after daylight saving time, compared to the previous Monday. “All of a sudden, you have a majority of the population who is tired on Monday morning,” Desmarais said.

Dr. Oliver Rawashdeh, a biomedical sciences lecturer at the University of Queensland, wrote an article discussing the impacts of daylight saving time. “Several studies have shown your risk of having a heart attack and stroke increases in the two weeks after the changeover,” he wrote. “Researchers suspect the link is because an hour of sleep loss increases stress and provides less time to recover overnight.”

Rawashdeh also highlighted daylight saving time’s effect on mood. “Research from Germany shows springing forward to summertime can have a negative effect on life satisfaction levels and feelings of anger and sadness, which can last a little over a week,” he wrote. “Your risk of depression can also increase during the month after daylight saving comes into effect.”

Penny Mott, a retired psychologist and local Sackville resident, also mentioned daylight saving time’s effect on mood. “On the first day we just feel a little out of sorts,” she said. “[There] is the feeling of disorientation with it being dark when you wake up, [which] puts you in a bad mood. Sleep deprivation always results in mood changes.”

Mott compared daylight saving time to the typical jet lag people experience when they travel. “[Daylight saving time] would be identical to having jet lag,” Mott said. “It is only one hour; if you travel from Quebec to the Maritimes, you’re going to feel tired because you lost an hour.”

However, Mott said, “We adapt pretty quickly.” She explained that the effects of daylight saving time are relatively short-lived, and tend to be a result of accumulated sleep deprivation rather than a one-time event.

On the flip side, there are benefits associated with daylight saving time that maintain its relevance. “It is safer to drive in daylight, so there are probably fewer accidents in the summer evenings than what you might expect if there was less light,” Desmarais said.

There has been some research indicating that daylight saving time can lead to a decrease in crime. “Based on robberies reported in the U.S., fewer muggings and other crimes tend to happen in the daylight,” Desmarais said.

“If people use that extra daylight to play outside and be active, then we may see a benefit to health in general, and to cognitive function,” Desmarais said. “The evening hours are great for physical activity: you’re not under the full sun and the temperature is typically cooler. But people have to get up from their couch and be active.”