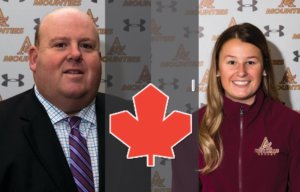 Beale and Rhindress announced to participate on women’s hockey team during the upcoming Winter University Games in Krasnoyarsk, Russia

Two members of the Mount Allison community have been named to the Canadian national hockey team at the postsecondary level. Abby Beale, a second-year arts student and hockey player, and Terry Rhindress, Mount Allison’s head coach for women’s hockey, have joined Team Canada for the 29th World University Games in Krasnoyarsk, Russia.

“The [World University Games] is considered a mini Olympics so it will be an incredible environment,” Rhindress said. The Games began on March 1 and go until March 12.

As the assistant coach for the newly formed team, Rhindress said he would have to focus on integrating team members who have never worked together in a short period of time. “[The World University Games] is a short-term event; we don’t have a lot of time together so we need to focus on the strength of the players,” Rhindress said. “When [Team Canada has] practices, we need to get together faster than we do with our Mounties programs.”

Despite potential difficulties posed by the limited timeframe, Rhindress is grateful for the opportunity. “This event features the best of the best players,” Rhindress said. “It will be a privilege to coach them.”

Rhindress has been working with Beale, who plays as a right wing on Mt. A’s women’s hockey team, for the past two seasons.

“Abby is a very strong skater, works hard in both ends of the rink, and can contribute offensively as well,” Rhindress said. “Abby [tries] to do whatever is necessary to help.”

This will be Beale’s 16th year playing hockey. Throughout her hockey career, Beale has played on Team Atlantic, attended the 2015 Canada Winter Games in B.C. with Team New Brunswick, and has now made Team Canada.

During Beale’s first year playing in the Atlantic University Sport (AUS) League for women’s hockey, she was the leading Mountie for points. Now, in her second year, she is the leader for number of assists.

In her preparation for the World University Games, Beale ensured that she directed her attention to factors she can influence, instead of concentrating on variables that she does not have an impact on. “[I’ve been] mentally preparing, focusing on what I can control, and getting my body ready for the time change,” Beale said.

As a university student attending a highly competitive sporting event, Beale has found that the process of balancing academics and athletics has become almost automatic for her. “It just seems like it’s in my nature. Most [of the] time I don’t even know I’m doing it,” she said. “Sometimes it’s hard, but it’s so rewarding! I love it.”

Rhindress said he is eagerly looking forward to the events. “This will be an incredible experience for both Abby and myself that we will remember forever,” he said.