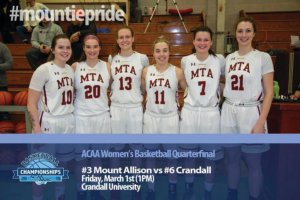 Yanniv Perez, a fourth-year commerce student who has played on the team for the past three years, was motivated to play well at the championships because it was his last opportunity to represent Mt. A during a game. “Understanding that it could be my final game as a Mountie, I tried to give it my all when called upon,” Perez said.

Through extensive preparation for the event, both as a team and as an individual, Perez felt confident going into the championships: “Being prepared takes away the pressure [of] a bigger stage and I was ready.”

The team trained for the championships by practicing four nights a week and watching film. Perez noted the team’s improvement in dynamics and motivation in the weeks leading up to the championships. “We weren’t nearly as good at the start of the year,” he said. “There were a lot of growing pains along the way until we started peaking in the final two weeks of the season.”

Jeshua Becker, a fourth-year environmental science student, reached the end of his fourth and final year on Mt A’s men’s basketball team at the championships. Becker noted a similar development of the team’s abilities nearing the end of the season even in the face of obstacles.

“In the final month of the season things really started to fall into place and that’s when we knew that we really had a shot of winning an ACAA championship,” Becker said. “We showed great improvement from the beginning of the year during the ACAA championships, and we were able to improve despite multiple injuries on the team.”

The women’s basketball team had similar training to the men’s team prior to the ACAA championships.

“Before the championships, we were all working hard to prepare for the games,” said Katherine Ollerhead, a fourth-year biochemistry student, who played on the women’s basketball team throughout her four years at Mt. A. “We watched film and worked on very team-specific aspects of the game to put ourselves in the best possible position.”

The women’s basketball team was able to advance to semifinals when the Mounties defeated Crandall University 76-47. “We had a solid game against the host team, Crandall,” Ollerhead said, mentioning second year-chemistry student Emma Hachey’s block.

Their time at the ACAA championships was cut short, but the women’s basketball team had remained motivated throughout the entirety of the event. “While the outcome was not what we wanted, we always worked hard, stayed together as a team, and supported each other no matter what,” Ollerhead said. “For the six seniors, the highlight [of the championships] was the chance for us to play our last games with such an amazing group of girls.”

Although the men’s basketball team didn’t reach their goal of winning the championships, they demonstrated their improvements during the semifinals when they defeated Mount Saint Vincent University (MSVU) 77-74. “Beating MSVU proved that we are the team we wanted to be,” Perez said.

Despite the distance between Sackville and Crandall University in Moncton, there was an enormous crowd of supporters from Mt. A attending every one of the Mounties’ games.

“There was so much support from the Mount Allison community at the games,” Becker said. “It pretty much felt like all of our games were home games.”