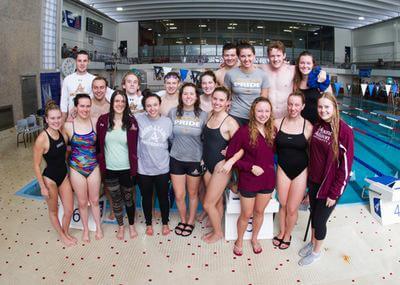 The Mount Allison varsity swim team picks up a gold, silver and bronze at the Subway AUS swimming championships

The Mounties participated in their last meet of the 2018-19 swim season at the Subway Atlantic University Sport (AUS) swimming championships this past weekend at Dalhousie University.

Henry has competed on the swim team throughout her four years at Mt. A, and is one of the team’s captains this season. During the AUS championships, Henry competed in the women’s 50-m and 200-m backstroke. She also participated in the team event for 200-m freestyle relay with Jillian Downey, first-year biology student; Megan Fitzgerald, second-year chemistry student; and Sabrina Baker, third-year chemistry student.

As one of the captains of the team, Henry offered her perspective on the team’s dynamic during the time leading up to the AUS Championships. “This season the team has been awesome at supporting one another and showing up for each other,” she said. “We had some great swims at our meet back in November to build upon and everyone has worked hard to get where we are now.”

Henry explained the training schedule the swim team followed to prepare for the AUS Championships: “We train six times a week in the water and three times a week in the gym,” Henry said. “We started our taper – the period of rest – about a week and a half ahead of the AUS [championships] to ensure we would reach our peak performance.”

Henry mentioned the mental preparation that was done as a team and as individuals for the meet. “Preparation for AUS was really about working together as a team to support everyone at practice and beyond,” Henry said. “For me, I’m graduating this year so [the] AUS [championships] is the final meet of my career. I knew the physical foundation was there to compete but I really had to prepare myself mentally to race and just swim as hard as I could for the last time.”

Brenna Rothfuss, a former Mt. A. student, is the assistant coach for the varsity swim team. Rothfuss explained the demands of being a student-athlete on the swim team, and how it has developed their strengths going into the AUS championships. “The [team’s] most notable strength this season is work ethic,” Rothfuss said. “These athletes, while staying on top of their studies, show up and dedicate 10 hours a week of hard work to this sport.”

Despite the heavy demands of being a student and competing on the swim team, the athletes have managed to stay optimistic throughout the season. “[The athletes] show up to practice every day with a winning attitude and all provide each other with the support needed to make it through all the grueling hours at the pool,” Rothfuss said. “It’s inspiring and helps create a positive training environment for all our swimmers.”

Siena Davis, a fourth-year biology student, has been on the swim team for her four years at Mt. A. Last weekend, Davis competed in women’s 100-m freestyle and 50-m backstroke.

Davis attributed a portion of the team’s success to the mixture of new athletes and graduates who were potentially facing their last opportunity to compete. With six graduating and six first-year athletes, the team has a combination of veteran and novice swimmers.

“I think our team’s strengths are that we have a lot of enthusiastic rookies who are a great, positive addition to the team,” Davis said. “We also have six graduates this year, so we all want to swim fast and get the best times at our last meet.”

Henry praised the members of the varsity swim team for their individual efforts during the AUS championships. “Everyone has set individual goal times for their races and worked very hard to achieve them,” she said.