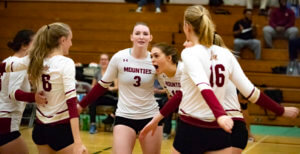 Winning seven of their nine matches, the Mount Allison women’s volleyball team stands in second place in the ACAA league

The Mount Allison women’s volleyball team has had a strong start to their 2018-19 season, successfully winning seven of their nine games.

The Mounties currently stand second place in the Atlantic Collegiate Athletic Association (ACAA) league, with 77.8 per cent of their games resulting in a win. The Mounties are ranked directly under Mount Saint Vincent University, who they look to play twice more in the upcoming winter season.

Rachel Van Gestel, a fourth-year commerce student, has been a major contributor to the Mounties’ success as the team’s captain and power.

“This year’s strengths mainly stem from the team depth, closeness of the team and overall drive to play our best,” Van Gestel said. “The support from all members, be it on the court or on the bench, is making a huge difference for us this year.”

Out of the 16 players on the volleyball team, nine are returning members of last year’s team, while  seven are new to the roster. “We have a pretty much even split between competitive rookies and dominant returning girls,” Van Gestel said.

Brooke Gillespie, a third-year geography student, is playing her third year on the team as a middle. “We have such a talented, but young, team this year,” Gillespie said. “I see this as a positive, as there is so much room to grow as a team.”

Emily Burbidge, a fourth-year biology honours student, has been playing on the volleyball team throughout her fours years at Mt. A as a libero and power. “I would for sure say this is the strongest, most skilled team we have had since I began playing here four years ago,” Burbidge said.

The team has demonstrated adaptability this season, using diverse combinations of players to adjust to each game.

“Skills-wise, our bench is very deep and anyone who is put on the court has the capability to perform at a high level,” Burbidge said. “Everyone contributes in their own way and I feel we are really connecting well with one another.”

“I feel like our team chemistry is better this season in comparison to last year,” Gillespie said, “which has helped create a positive atmosphere that has allowed us to win tough matches that we weren’t able to win before.”

After their game against Holland College on in Charlottetown, P.E.I., on Nov. 30, the team looks forward to 11 regular season games in the 2019 winter term. Burbidge said that she’s looking forward to “getting a chance to show some of the strong teams that we are a force to be reckoned with.”

Van Gestel said she is also looking forward to the second half of the season. “We’ll be facing a lot of teams for the second [or] third time, and it will be exciting to face teams gunning to take a win from us,” she said.

With their current record, the team looks optimistically to the rest of the year. “We have the goal of bringing home an ACAA banner this year, and with how we have been playing so far, I believe we have a great chance,” Gillespie said.