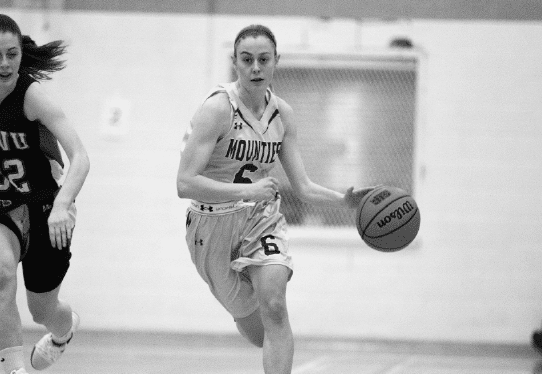 This past March, Mount Allison hosted the Atlantic Collegiate Athletic Association (ACAA) basketball playoffs, pushing the MacCormack Gymnasium to capacity with hundreds of fans taking in the action throughout the weekend. The success of the tournament was not limited to attendance, as both the men’s and women’s teams showcased the growth they have undergone in recent years. ‘

The women’s team fell to a more experienced Mount Saint Vincent Mystics team in the semi-finals, while the men’s team qualified for nationals by reaching the final, where they lost to Holland College. While no banners were raised, the results confirmed that both teams are indeed among the elite of Atlantic Canada.

“I think in the past three years we have really developed a good team atmosphere and a culture that everyone has bought into. Everyone is on the same page and knows what our goals are, and we are all working hard to reach those goals together,” third-year guard and biology major Sarah McGeachy said.

Following the success of the conference playoff both on and off the court, it was announced that Mt. A will soon be taking its turn at hosting a national tournament. The Canadian Collegiate Athletic Association (CCAA) women’s nationals will be coming to Sackville in 2018.
The Mounties will receive an automatic bid to the tournament, but this will not be the first experience at nationals for many of the team’s players. In the 2014-15 season, head coach Matt Gamblin led the team to the national tournament hosted that year across the country at Vancouver Island University in Nanaimo, B.C.

Erin Steeves, a third-year biology major and small forward, was a part of that team and went to nationals in her rookie year. “[We had] eight or nine first years that year, so obviously [it was] a new team,” she said. “I didn’t expect for us to [go to nationals] just being such a new team.”

The Mounties shocked St. Thomas University in the 2015 conference semi-finals and secured a spot at nationals, squeaking out a narrow win against a team they had lost to all year.

The team entered that national tournament as the eighth seed, going up against the top teams in the country. They posted a 0-3 record, but held their heads high with respectable results. “It was a really great experience. The atmosphere of…such a high level of basketball I really think brought the team together,” Steeves said.

Since that tournament the team has continued to grow, becoming a top team in their conference. New additions such as second-year forward and CCAA All-Canadian Kiersten Mangold and this year’s ACAA rookie of the year Jill Harris are indicative of the program’s continued growth. “It’s awesome for us to have girls that can come in and make an impact in the league right away. It allows [us] to continue moving forward without taking any steps backward,” McGeachy said.

For the Mounties, the automatic bid to nationals won’t be a distraction from their regular season. “Our goal has always been to bring back a banner,” Steeves said. “I think if we focus on our final goal of us winning our championship, we can really prove that we deserve to be at nationals.”

With three still remaining from the team that went to Nanaimo and a roster full of players who have experience with the consistently high level of play that is expected at tournaments, the team looks set to not only host nationals, but be a strong force as well. “Going into nationals with a more experienced team, one that’s grown over the years, will definitely benefit us,” Steeves said.

The championship will be held from March 14-17, 2018 in Sackville. For the players who travelled to Nanaimo, the tournament will be a bittersweet end to their university careers. “I can’t wait for next year, [to be] able to finish out my university career with my friends and family there to watch,” McGeachy said.