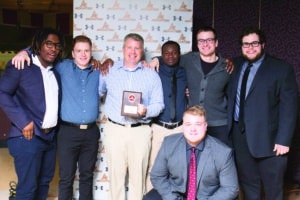 Last  Thursday, Mountie Day ended with the Night of the Mounties, an awards banquet to celebrate Mount Allison’s varsity athletes. Each year, records are broken, history is made and new successes are celebrated.

There were a lot of reasons to be a proud Mountie this year. The men’s basketball team qualified for nationals for the first time, the badminton team claimed their ninth-straight ACAA championship, the football team landed a spot at their fourth-straight Loney Bowl, and the swim team sent a record-breaking three swimmers to nationals.

Each team’s head coach then awarded one athlete (or two, if co-ed) with a Rookie of the Year award. This year, the awards were presented to: Suzuha Tanaka and Azeem Munawar of badminton; Morgan Gamble and Patrick Hennessey of women’s and men’s soccer, respectively; Katya Parker of swimming; Brooke Gillespie of women’s volleyball; EmmaRae Murphy of women’s hockey; Jakob Loucks of men’s football; and Jill Harris and Thomas LeGallais of women’s and men’s basketball, respectively.

“The athletic banquet is for sure one of my favourite memories of the year,” first-year student and badminton player Azeem Munawar said. “Seeing our community come together supporting all Mounties, regardless of what team you were on, seeing everyone cheer for you when you got an award – it’s great to see all of the accomplishments we have made as individuals and as a school this past year.”

Each team also recognized an athlete as the most valuable player (MVP). The MVP awards were given to: Tessa Richie of women’s soccer; Rachel McDougall of women’s volleyball; Olivia Feschuk and Geraint Berger of swimming; Olivia Adams and Jaryd Morrissey of badminton; Kierstan Mangold of women’s basketball; Jennifer Bell of women’s hockey; Bradley Payne of men’s soccer; Jesse Balser of men’s basketball; and, from football, Chris Reid for offence, Kyle Horseman for defence, and Jakob Loucks for overall MVP.

“It felt really good to [be named] the university’s overall Rookie of the Year. I was really surprised and very excited at the same time. The whole night was amazing,” LeGallais said.

McDougall also shared her thoughts on the ceremony. “It was so much fun. I’m so grateful that I’m a part of the Mounties family,” she said. “Mt. A has given me so many amazing opportunities and I’m honoured to have received these awards. I’m very thankful to have had such a great season with an awesome group of girls.”

The overall MVP awards were presented to Kiersten Mangold from the women’s basketball team and Jakob Loucks from the football team. Mangold was named to the CCAA first team and was awarded the title of All-Canadian. Loucks received USports national Rookie of the Year honour.

The athletes were not the only ones receiving recognition this evening. Each year, the Bubsy Grant award is presented to one deserving individual who, through time and effort, has made a significant contribution to Mt. A athletics. This year’s award was presented to Zach Ball, assistant coach of the women’s hockey team, for having devoted over 12 years to developing the women’s hockey program.

With another Night of the Mounties behind us, Mt. A looks forward to another history-making year of athletics in the 2017-18 season.