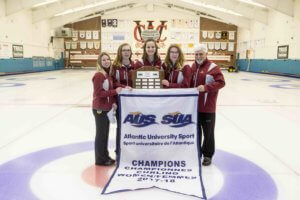 The Mount Allison women’s curling team is not a team that gets much attention on campus. In fact, many students have not heard of them at all as they do not participate in a league, and instead play casually on their own here in Sackville. Before reading week, the four Mt. A students participated in the AUS championships, despite their club sport status. Sarah Doak, Julia Hunter, Samantha Crook and Krista Nix have all been curling for over 10 years and showed up together as a team with confidence for the tournament.

Going into the tournament, Doak knew that the team had a chance at winning. “I expected that we would be able to compete with all of the other teams, and that we definitely had a good shot at making the playoffs,” Doak said. “From there, I felt that if we could play to our capabilities, we would have a very good chance of making the finals and booking our ticket to Leduc.”

The Mounties ended up coming out on top of the tournament, walking out victorious after defeating Memorial University in the finals. With the win, the team qualifies for the U Sports national final in Leduc, Alberta.

Doak explained the emotions that came along with the championship: “It’s one of the best feelings. I’ve won provincial championships in other sports, but this was my first big curling title, so it’s safe to say I’ve been waiting for something like this for a while.”

The girls do not play in a league outside of Sackville, and therefore the only travelling they do as a team is to the AUS championships, which they pay for through fundraising and personal contributions. Originally, funding was a concern for nationals, but the girls explained that they received some support from Mt. A despite being a club sport.

“After our win, we did receive some funding combined from the Campbell-Verduyn Fund and the athletic department. Although it won’t cover all of our expenses, we appreciate the support the school has shown us as we go off to nationals.”

Impressively, the team does not formally practice. They explained how their training works while being full-time students here on campus. “Due to limited ice time in Sackville, and conflicting schedules, we typically practice on our own throughout the week. Additionally, we each curl in the various evening leagues at the Sackville Curling Club.”

Clearly, the four girls trust each others’ talents and work well together despite the lack of practicing that they do together. Going into nationals, Doak talked about what she expects: “My expectation for nationals is to play to the best of our abilities, compete well against the other teams and hopefully secure a playoff spot.”

The U Sports Curling Championships will take place March 24–28 in Leduc, AB.