A ballet with a conscience 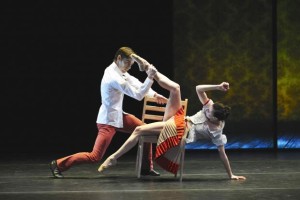 Ghosts of Violence puts spotlight on violence against women.

The issue of relationship violence will be centre stage during the Atlantic Ballet Theatre of Canada’s production of “Ghosts of Violence.” The critically acclaimed ballet will be performed at Convocation Hall on October 8.  The free event is produced as part of the company’s national Celebrate Courage initiative to end violence against girls and women.

The Atlantic Ballet Theatre of Canada premiered “Ghosts of Violence” in 2011 in an effort to bring the issue of domestic violence to the spotlight, and raise awareness and understanding around the complex problem. The ballet is an innovative, multimedia production written by famous Canadian playwright, Sharon Pollock.

Pollock, along with community partners and choreographer and artistic director, Igor Dobrovolskiy, will host a pre-show discussion at 6:40, following opening remarks by Robert Campbell at 6:30. The discussion is intended to create an inclusive and educational dialogue surrounding issues of domestic and relationship violence. The performance is scheduled to begin at 7 pm.

Although the ballet is sure to be moving on an artistic level, CEO of Atlantic Ballet Theatre of Canada, Susan Chalmers-Gauvin emphasizes that the performance is primarily about raising awareness around relationship violence against women.

“By exposing this issue to people at a young age, we hope to play a role in breaking the cycle. Intimate-partner violence against girls and women, including dating violence, has enormous social and economic costs for society,” said Chalmers-Gauvin.

The ballet company believes that discussion and education are imperative to the promotion of social change. Prior to the performance, students will have the chance to educate themselves on issues of intimate partner violence by visiting booths and exhibits set up by the by community service providers and the Mount Allison Students’ Union. The booths will be available for viewing an hour before the event, at 5:30 pm.

Melody Petlock, Mt. A’s sexual harassment advisor and coordinator of S.H.A.R.E (Sexual Harassment and Assault Response and Education), was instrumental in bringing this event to campus. She also emphasizes the importance of being informed about domestic and relationship violence.

“I think we do need to continually be aware of these issues. As we develop as critical thinkers, we learn to understand power and power dynamics, but we don’t always think of it in the context of our personal relationships as much as we could. I think this event will really afford us the opportunity to keep that awareness and have a new way to frame it,” she said.

Petlock believes that presenting issues of violence through art is an important way to raise awareness and student engagement.

“This is not necessarily the kind of material that most people would feel that comfortable with, so to put it into a cultural context sends this message in an appealing way,” said Petlock. “More traditional ballets are based on myths, legends, fairy tales, and [‘Ghosts of Violence’] is taking that idea and turning it into something real and relatable.”

“Ghosts of Violence” will also be performed at the Capitol Theatre in Moncton on Friday, Oct. 4, at 7:30 p.m. To learn more about the Atlantic Ballet Theatre of Canada and the Celebrate Courage project, visit http://atlanticballet.ca.