A play within a play 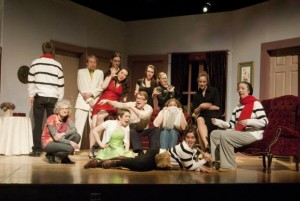 Windsor Theatre Out of the Box presents Noises Off!

Nothing On is the worst play I’ve ever seen performed at Mount Allison. That shouldn’t be surprising, however, because Nothing On is itself a part of the performance of Noises Off!, a very unusual farce which was performed by Windsor Theatre Out of the Box last week, to a standing ovation by their audience.

Noises Off!, written by Michael Frayn and directed by Decima Mitchell, is a unique nesting-doll experience—a play within a play. The audience’s expectations of a typical stage comedy are stripped away as the off-balancing concept hits home; we are watching actors rehearse for a show that they have yet to give. Throughout the performance, we are privy not only to the more typical difficulties of a production (forgotten lines, bungled entrances, and the like), but also to the personal interplay of the actors (love triangles, alcoholism, and stress).

The nature of this piece makes for a reviewer’s adventure. This is perhaps best demonstrated by an elderly burglar played by a senile drunk, played by veteran Mount Allison actress Cat McCluskey, screaming about a ballcock. Having said that, the show provides plenty of material for analysis. The chaos and confusion that are native to the genre of farcical comedy were, if anything, amplified by the continuous jumping of the actors into and out of their roles in Nothing On.

It is the mark of a skilled actor to be able to portray a layered and complex character; to be able to showcase a character portraying another character is a gift, and one that the Windsor Theatre team demonstrated magnificently on Thursday night.

“Balancing two characters is really hard,” said Victoria Valliere, a first-year student who played Brooke Ashton (and Brooke’s character, Vicki), saying that she had to carefully prioritize her schedule in order to learn her lines.

Noises Off! brings the background forward for our examination, and similarly, the physical background was another vital part of Windsor Theatre Out of the Box production. The set is inherently difficult for a theatre company to portray, because it typically requires the use of a revolving stage. The Windsor Theatre crew had to compromise—they used a revolving audience. Moving the crowd during the intermission immersed them even further into the action for the intensely physical second act.

The show’s energy was made possible through use of several elements of farce, something that the characters even comment on during the play: “All these doors!” one of them exclaims. The difficulty in keeping the production organized was never evident to the audience, but it was a headache for the production team.

“It was a really hard play to put on,” said assistant stage manager Pascal Herzog. “My job literally just involves ferrying props around to their required spots.“

Noises Off! is an excellent example of how hard work can pay off.