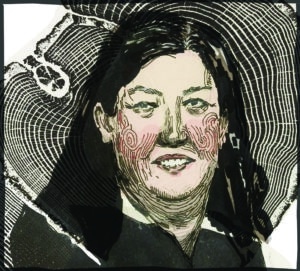 Playwright, actor, director and filmmaker Mieko Ouchi spoke last Wednesday in the Motyer Fancy theatre. A multi-talented gift to the Canadian arts world, Ouchi spoke on her journey to success in theatre, offering words of encouragement to aspiring drama students. She presented at Mount Allison as part of a week of guest lecturing in New Brunswick.

“I love to talk to people who are just starting drama studies. I hope my story can inspire you to reach out [because] you never know where your passions may lead you,” Ouchi said.

Ouchi did not always know she wanted to work in theatre. In fact, she  initially studied genetics, but within a year learned that drama and the arts compelled her more. She went on to study in a classical acting training program at the University of Alberta.

“I was really on the road to becoming a professional actor,” she said. “But I felt the walls and ceiling of what it was to be an actor; I would be seen [in only] one way; I was discovering the limits [of acting].”

Her first experience with writing and directing was through a collaboration   with a film school friend. Together, they produced a short documentary about her grandfather.

“That first film was such a gift because it showed me that I had something to offer as a creator,” Ouchi said. The film, Shepherd’s Pie and Sushi, was co-produced by the National Film Board of Canada and aired on CBC.

Soon after, Edmonton’s Catalyst Theatre commissioned her to write a six-minute play, which eventually became the beginning of her first play, The Red Priest.

“I started with six minutes, so I hope that inspires you….Six minutes can blossom into something,” Ouchi said. “I had no formal writing training, but I’ve always enjoyed jumping in, and I think that that has served me well. I didn’t know the rules, so I was unafraid to break them.”

“If you want to make a job in theatre, embrace it all; these strange jobs may spark something in you,” Ouchi encouraged. “Try all the jobs – you will find the right fit. Or wear many hats; that’s what I do.”

Ouchi read from her play The Blue Light, based on the true-life story of Hollywood studio executive Leni Riefenstahl, who produced propaganda for the Nazis. She wowed audience members with her ability to act out the characters in her reading.

University President Robert Campbell commented on Ouchi’s ability to act through her reading during an open question period. He asked if she felt that her background in acting shapes the way she writes. “I love actors. I want [my] plays to live and breathe in the 3D,” she replied.

The talk concluded with a reading from the early draft of Ouchi’s newest play, which tells the story of her mother dealing with her husband’s death. At the excerpt’s conclusion, the room filled with resounding, emotion-filled silence, broken only by uproarious applause.

Ouchi believes that important work needs to be done to diversify theatre in terms of race, class, ability and their intersections. “Theatre has to change; we are an ever-changing art form. We need to be more diverse, and I am working for this in my casting.”

“It’s going to require much more outreach,” she continued. “Inclusivity is important and needs to find a way onto the stage.” To this extent, Ouchi put on a deaf opera in Edmonton this February.

“I want [my works] to be pieces of art, but I also want them to mean something. I believe art is one of the best teachers that we have and is the best [tool] to get beyond surface labels,” Ouchi said in closing. “This is the best gift theatre has given me and I hope that I can pass this along … [but] it’s up to you what you take from it.”

Ouchi has written several plays, most notably The Red Priest (Eight Ways to Say Goodbye) and The Blue Light. Her work has been translated into various languages, including French, Japanese and Russian. She has received several award nominations for her work.