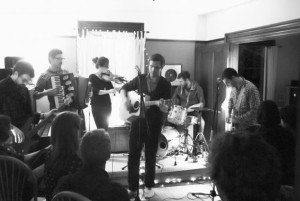 A long time ago (this past Friday), in a galaxy far, far away (Upper Sackville), Banded Stilts played an intimate house show to celebrate the unveiling of their debut LP, Little Villages. And what a suitable name it turned out to be, encompassing the six minute drive, and a venue that turned out to better encapsulate what the rural life is, one that is not available within the (Lower) Sackville most students are exposed to. The humble indie folk mirrored the hospitality of the MacKinnon House where the show was all around bright and inviting.

Newfoundland based Gavin Simms got things rolling with sombre and moody song writing, something that is not quite often paired with folk music. The tone allowed the music to make a great retreat from the formulaic into the uncharted waters of originality. Although, as the show went on, Simms’ lyrics did become more typical of the genre, especially as he invited his girlfriend to join him for a couple of his happier songs. Hushed and spacious, his solo guitar work left room for his singing to linger and impact the audience, proving an especially effective when paired with the polite atmosphere of the venue.

Choosing to play their set in the same order as the album, Banded Stilts featured a rotating cast of instrumentation, with the band swelling to six members at some points and impossibly fitting on the stage they were allotted, drums and all. This arrangements similarity to the recording process was evident to all in attendance, as the set came across with a powerful vitality, making how close to home the music was very apparent.

The connection between the musicians and the audience was quite the phenomenon. The event played out like a dinner party joyously interrupted by the appearance of a six-member folk band, complete with an opener. They left only enough room in the small living room to gape at the musicianship and contemplate how quirky the dynamic itself was.

Little Villages, recorded by Don Mackay in Halifax over the course of 2012 and 2013, is the Sackville band’s first follow up to their 2011 EP By The Back Stair, which led them to being showcased all over the country, including a performance at 2012’s SappyFest. The new album is absolutely littered with a huge variety of instruments giving each song a very particular palette while still fitting together with consistency in lyricism and pacing. The band’s shift from a three-piece group to a six-piece ensemble has added to the depth of each song and made their live incarnations more complex and engaging. Their increased sonic capacity led to a living room that swelled with joyous sound despite the laid back atmosphere of the MacKinnon house.