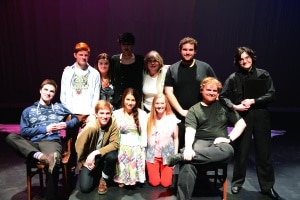 Chatroom takes place almost entirely within internet chatrooms, where the play’s teenage bullies are free to harass others with no repercussions. Mark Turner plays Jim, a 15-year-old struggling with abandonment issues, depression and suicidal thoughts. Jim seeks comfort and advice on the internet, eventually landing in a chatroom for teenagers in his area. The chat – starting with critical deconstructions of Harry Potter, Willy Wonka and the Chocolate Factory and Britney Spears – takes a dark turn when two users, William and Eva, make Jim the target of their emotional manipulation.

The technical aspects of the production were simple yet effective. The set consisted of six chairs, one for each character, with a coloured dot on the floor in front of each chair indicating the character’s online status – green for online, red for offline, and yellow for away. A white curtain served as the backdrop, with differenly coloured lights reflecting the mood of the scene. The sound of typing away at a keyboard played subtly in the background while characters spoke, reinforcing that their interactions were almost exclusively online.

The only time the characters were offline was during the play’s climax, shown in a video projected on the backdrop. They are in a crowded cafeteria, and with the exception of Jim, who stands out among the crowd, none of the characters can identify the others. The video format effectively established the onstage interactions as solely online, with offline interactions requiring a completely different medium.

Ben Currie and Alexandra Duchemin, who play William and Eva respectively, did excellent jobs of portraying the nasty antagonists. Duchemin’s posture and confident struts across the stage during scene changes situated Eva as the play’s archetypal mean girl.

Meanwhile, Currie mastered both sides of William’s character: the aggressive rebel without a cause and the fabricated image of the good Samaritan. From sadistic laughter and harsh verbal attacks to a falsely compassionate and gentle tone of voice, Currie’s acting style made it clear that William was an online force to be reckoned with.

The main issues with this production were not with the performance or technical aspects, but rather with Walsh’s script. The writing does injustice to the antagonists, as they lack clear motivations for their abusive behaviour. The play’s resolution is also unsatisfying, with the antagonists facing no consequences for their actions. Despite this, the actors skilfully brought their characters to life, channelling the personae of internet abusers.

From casual popular culture debates to standing up to online abuse, Chatroom’s cast successfully portrayed the experience of bringing personal and social issues to a public space.