Comedy and a capella 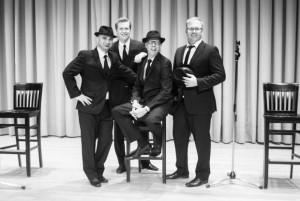 Audiences were brought to their feet last weekend as Cadence, an a cappella vocal quartet from Ontario, made an appearance in Brunton for this year’s third instalment of the Performing Arts Series. Due to popular demand, the event was Cadence’s third visit to Mount Allison, and was made possible by the J.E.A. Crake Foundation.

Currently based in Toronto, Cadence is a quirky quartet consisting of Carl Berger, Ross Lynde, Lucas Marchand, and Kurt Sampson, all of whom are distinguished vocalists from all over Canada that have combined their collective musical talents and playful personalities to the immense entertainment of audiences around the globe. The ensemble was founded in 1998, and has recorded four studio albums, two of which have been respectively nominated for Juno awards in 2001 and 2006.

The evening’s performances quickly demonstrated Cadence’s musical diversity and group chemistry for which they are famous. Easily covering 500 years of music to comedic effect, Cadence performed a Renaissance madrigal to the lyrics of Justin Bieber’s “Baby,” and a Gregorian chant that evolved into an a cappella rendition of “Smoke on the Water.” Additionally, the quartet playfully presented one of Mozart’s horn concertos performed entirely in scat singing. In this way, the ensemble combined their concise knowledge of historical styles and genres with their desire to entertain by uniting the classical with the contemporary.

Cadence is clearly most comfortable performing early jazz tunes from the forties and fifties, with names like Frank Sinatra, Nat King Cole, Cab Calloway, and Louis Armstrong lighting up their repertoire. Their uncanny ability to reproduce the sounds of swing using only their voices is both remarkable and enjoyable; one could almost believe that Cadence is a full jazz ensemble, featuring trumpets, trombones, saxophones, and even percussion. In addition, Cadence encouraged participation and engaged heavily with the increasingly enthusiastic audience, using “call-and-response” singing and randomly selecting people to perform short vocal solos.

Another notable performance of the evening was Cadence’s rendition of Gordon Lightfoot’s famous Canadian epic “The Wreck of the Edmund Fitzgerald.” The members of Cadence are also involved with a Toronto-based Gordon Lightfoot tribute band who have recently been recognized by the folk legend himself. Theirs was a solemn and soulful a cappella interpretation of this classic. International audiences have even enjoyed this version. “It’s got some real Canadian history to it,” remarked Sampson, reflecting upon their recent performance of the song in Germany. “People really like that aspect.”

In the interest of Canadian bilingualism and Cadence’s recent travels to Europe, the ensemble also sang Pink Martini’s “Je ne veux pas Travailler,” a tune that further allowed the group to draw attention to their own silliness. Finally, in honour of Atlantic Canada and Sampson’s own P.E.I. heritage, Cadence returned for an encore with Stan Rogers’ memorable folk song “Barrett’s Privateers,” which had the entire audience singing and clapping along to the Maritime classic. With their massively diverse range of musical styles and their playful presence that is engaging, comical and fun, one can only hope that Cadence will make yet another return trip to Mount Allison in the future.

The Performing Arts Series will resume on Feb. 4, 2014, with the talents of Japanese drumming ensemble Fubuki Daiko kicking off the winter semester.