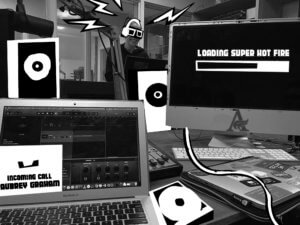 From folk to funk, this year’s album has it all

Last week, I sat down with several members of Conduct Becoming to discuss their involvement with the society and their upcoming album launch. The society, which started in 2001, works together to create albums each year which are dedicated to the memory of Jason Abraham, a Mount Allison student who died of cancer. All proceeds go to the Canadian Cancer Society. “It started as a memorial project and it’s been going strong every year since,” said Clare Maguire, a third-year psychology student who worked as a co-producer of the album this year.

For third-year philosophy student Amy Ward, her involvement with Conduct Becoming has introduced her to a community of musicians on campus and helped her develop a song that she originally wrote in high school into something very different. “As a musician it’s fun to share my music and it’s nice to have a place where that’s accepted and that’s casual and not judgemental,” she said.

Gill Hill, the president of Conduct Becoming and a third-year fine arts major, has participated with the society for three years in a row. “We’re all university students that produce their own music, and all of the funds that we get from coffee houses and performances get donated to Canadian Cancer Society,” said Hill. “Conduct Becoming really gives students that opportunity to put their music out there and really go through that recording process and make a song that you maybe just wrote into an ideal picture.”

This year’s album has a range of genres from pop to musical theatre. “Eclectic” is the word that Maguire used to describe it. “We’ve got some folky, more traditional singer/songwriter stuff, we’ve got some pop/soul, a killer funk tune … from folk to bluesy rock to electronic stuff. It’s a cool album and I’m very excited about it. It’s a smorgasbord.”

The society also hosts several open mic nights throughout the year to show off the work they’ve done. Shaina Kennedy, a third-year science student who recently joined Conduct Becoming’s exec team as the VP of finance, stressed the importance of these events. “Conduct Becoming is for artists that want to show their capabilities,” she said. “I think that has a really big value in the Mt. Allison campus because Mt. A is very liberal and artsy and having this sort of [society] can show the music side as well.”

Anna Hardie, a second-year economics student, called her experience with Conduct Becoming rewarding, noting the collaboration with other musicians and producers really helped her develop a song that she wrote last year into something new. She also discussed how varied this year’s album will be. “It’s going to be a very multicultural, diverse album,” said Hardie. “There’s a whole variety of music in this album.… It’s going to be really unique.”

Conduct Becoming’s album launch will be on Thursday, April 4, at 9 p.m. at Ducky’s. The album is available for pre-order through their Facebook page or you can contact them at [email protected] or [email protected] for more info. If you’re interested in listening to music from previous years, you can find it on Spotify or Bandcamp.