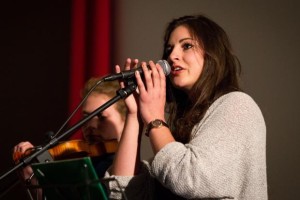 Alongside the launch of Conduct Becoming’s thirteenth album, featured artists shared their exceptional talents in front of a live audience at The Vogue Cinema on Saturday, March 28.

“We had almost one hundred people come,” said Willa McCaffrey-Noviss, Conduct Becoming’s executive producer and one of the event’s main organizers. “It was incredible.”

McCaffrey-Noviss, who was featured as a recording artist on last year’s record, took over Conduct Becoming to help manage and organize the project. The album was recorded and produced by Stephen Buckley and Justin McKiel, who are also featured as accompanists on several tracks.

Conduct Becoming: Voices Against Cancer began in 2001 in remembrance of Jason Abraham, a Mount Allison student who died of cancer. Since then, Conduct Becoming has raised funds for cancer research and provided an opportunity for Mt. A musicians to be featured on an album and engage directly with the recording process.

McCaffrey-Noviss said that this year was one of continuing reorganization for the project, which was reinvigorated in 2013 by Odum Abekah after a brief period of relative decline. In spite of some challenges the project faced at the start of the year, Conduct Becoming’s 2015 album and recent concert attest to the continued success of the project.

The concert showcased the wide range of talent of the album’s contributors. In addition to the artists’ original songs, other performances included covers of well-known songs such as “When the Night Feels My Song” by Bedouin Soundclash, “Home” by Philip Phillips and “Revelry” by Kings of Leon.

“I think that each performer brings something unique, and they make this beautiful mosaic of sounds,” said McCaffrey-Noviss. “[Jesse Corrigan] plays piano like you wouldn’t believe; and there’s The Shí, who started playing a kind of Maritime music, and they’re hilarious; and Kylie Fox singing about Tinder. Everyone’s so funny but so unique,” said McCaffrey-Noviss.

Conduct Becoming has helped launch the careers of many Atlantic Canadian artists including Mike Allison, In-Flight Safety, Jon Epworth, and Allison Lickley. McCaffrey-Noviss’ sights, however, are not set on stardom.

“I’m just having fun,” she said. “I recently just started writing songs. I’m not aspiring to make it big, I’m just enjoying myself.”

McCaffrey-Noviss said that this philosophy extends to other participants in this year’s project.

“I think that the key is for everyone to be having fun,” she said. “When you’re making music it’s hard not to have fun, and then I think if something big comes out of it, that’s great too.”

Over the years, Conduct Becoming has served as a way to commemorate victims of cancer and raise money for cancer research, while also celebrating the musical talents of Mount Allison students.

“I really love Conduct Becoming,” said McCaffrey-Noviss. “The opportunity to be on a recorded CD that you get to bring home for Christmas and show your friends – it’s kind of a once in a lifetime opportunity that not every university has to offer. I really hope that any musicians out there who want to get involved next year do.”

Albums can be purchased for $10 at the student centre, the proceeds from which will go to the Canadian Cancer Society.