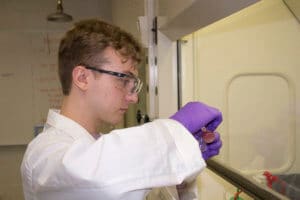 It’s a small world after all, at least according to Nolan Parker

In the movie adaptation of J.R.R. Tolkien’s beloved classic The Lord of the Rings: The Fellowship of the Ring, the Lady Galadriel states that “Even the smallest person can change the course of the future.” It’s an apt reminder to not forget the impact of the small things, people or in this case particles that surround us every day. When it comes to this world of the proverbial unseen, Nolan Parker is an expert.

Having just completed an honours degree in chemistry looking at nanorods, Parker is no stranger to the small. Nanorods are tiny, rod-like structures that are so miniscule they’re invisible to the naked eye, and can only be viewed by very precise (and expensive) instruments such as the transmission electron microscope (TEM), which uses electrons to image molecules.

“Nanoparticles, and more specifically the nanorods I studied, have a plethora of potential uses including chemical sensing, photovoltaic cells and biomedical imaging,” Parker said.

Making these seemingly magical particles has almost become second nature to the chemistry major. “First, I take a compound containing molecules of gold and create seed particles from it,” he explained. “Those are small, round nanoparticles that I then use to grow nanorods out of.” Once he makes these gold nanorods, Parker can change their properties by putting different capping molecules, called ligands, on different parts of the nanorods.

For his honours research, Parker’s ultimate goal was to see how changing the ligands affected how the nanorods grouped together. “I experimented with various ligands,” Parker explained, “and pioneered using Surface-Enhanced Raman Spectroscopy [an analytical technique] to characterize my newly created compounds.”

Thanks to Mount Allison’s unique research opportunities for undergraduates, Parker was able to gain lab experience in the summer after his second year as a research assistant in Dr. Meli’s nanoparticle research lab.

“Dr. Meli was actually the first person to introduce me to nanomaterials,” Parker said. “I had never seen them in class before that, much less done any lab experiments with them. She’s the reason I’m pursuing postgraduate studies in this field.”

In the fall, Parker will begin his PhD at Simon Fraser University in British Columbia. There he will be working with Dr. Byron Gates, a Canada Research Chair in surface chemistry, who investigates nanomaterials with a focus on nanoelectronics and biomedicine. “It’s a large group, unlike here at Mt. A, but I’m excited about the work I’ll get to do,” Parker said.

Parker’s interest in science began when when was quite young. “As a child I was given one of those ‘101 chemistry experiments’ books and I would goof around with it,” he said. “I probably made more baking soda and vinegar volcanoes than any kid really should.”

It’s been a long journey of scientific discovery since then, of which he can now say Mt. A has been a significant part. Though he’ll move out west for the coming school year, Parker says he’ll “never forget the time [he] spent here,” just like he still remembers continuously creating miniature volcanoes to watch them bubble in wonder.

Mt. A may be a small school, but it’s a small school that does great things thanks to students like Parker. So dream big, grads of 2018, and as you head off on new adventures outside of Sackville, remember to carry that small town in your hearts wherever you go.