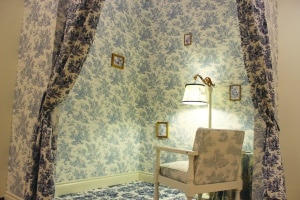 Upon reflecting on her time as a fine arts student at Mount Allison, Lily Furlong said that the small and tightly knit community has been formative to her as an artist and as an individual. In a testament to this, 12 fine art graduates have put together a final exhibition titled “Less Famous Now,” currently on display at the Owens Art Gallery.

Furlong said that the exhibition’s title was chosen as a group, and is meant to be a tongue-in-cheek reference to a headline they found in a tabloid magazine.

“It’s kind of a funny and hopefully untrue suggestion that our artistic careers have already peaked,” wrote Furlong in an email.

Furlong has three mixed-media pieces in the exhibition: “Tang Dynasty Tomb Guardian”, “Pink Lotus Tiffany Lamp” and “The Meiyintang ‘Chicken Cup’,” all of which are based on and named after invaluable artefacts at the Cleveland Museum of Art. However, Furlong’s pieces are made from discarded and found materials such as plastic forks, squashed yogurt cups, broken glass and mangled pop cans arranged to roughly resemble their namesakes and then dipped in white epoxy and enamel paint.

Furlong said she is drawn to the ways in which a gallery or museum space can imbue seemingly worthless objects with artistic or cultural significance. She said that her exhibit is a way of posing the question: ‘Could our old food containers one day become relics of our age?’

“The value of these everyday objects changes when they become sculptures in a gallery,” said Furlong.

To accompany Furlong’s found-material sculptures, an image of each respective artefact is screen-printed directly onto the gallery wall behind it. Other pieces in the exhibition, such as Emma Hoch’s “Tell a Toile Story” and Corryn Bamber’s “Beed the Firds”, are installed into the gallery and invite viewers to enter enclosed spaces and actively engage with the creative process.

“Much of the work will be a temporary thing that exists for this summer only,” said Furlong. “Hopefully people will be drawn to that and want to experience our show, because so many works have been designed as an experience.”

Jihye Bang – another graduating fine arts student – contributed six photographic pieces to the exhibition, all of which are part of a larger series currently in progress. Many of the photographs are self-portraits, and use hard shadows, reflective surfaces and multiple exposures to create overlapping silhouettes and ghostly copies of the artist.

Bang said that the pieces are a form of “visual self-exploration,” and that they echo psychological theories of selfhood and identity such as those of Carl Jung.

“Shadows have negative connotations—a space without light, an unknown,” said Bang. “I used [them] to represent the subconscious, and hidden or negative aspects of the personality.”

Because she moved from South Korea to Canada in 2009, Bang also said that the multiple exposures were a way of representing an internal split between Korean and Canadian cultural identity. This is also evident in the works’ titles, as they appear in Korean with an English translation.

“Coming to university represented a big change, especially since I was now separated from my family,” said Bang. “In changing languages, countries and their cultures, and simply by maturing, I adapted to my new environment and was surprised at the ways my personality changed.”

Both artists spoke to the fact that coming to terms with themselves as artists was both an individual and a collective experience. For example, Bang likened her work’s themes of identity to Anna Cai’s cyanotype print and to Ayla Ernst’s sculpture “Significance of Memory and Space,” while Furlong compared her work to that of Emily DeJong, whose studio was adjacent to hers.

“We’ve all influenced each other over the years,” said Furlong. “We’ve all changed and grown as a result of our proximity and closeness as a group, and that’s really reflected in this exhibition.”

“Less Famous Now” will be featured at the Owens Art Gallery until June 26, with an opening reception to be held on May 14 at 4p.m.