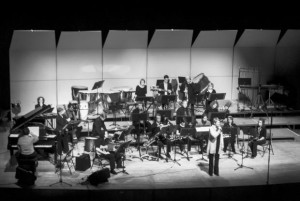 The atmosphere in Mount Allison’s campus pub was bright and cheery Friday night once all the musical performers had finished jockeying for stage space. They were Vancouver-based The River and The Road (TRaTR), Woodpigeon, and Sackville-based Michael Duguay. Interviewing TRaTR’s drummer Cole George beforehand, The Argosy learned of a couple hiccups the band had run into along its first cross-nation tour, namely playing Toronto’s The Cameron House, whose stage was so small it could accommodate only half of George’s drum kit. Luckily, this was not the case at the relatively spacious Pond.

Woodpigeon, hailing from Calgary, was the night’s first act, and they soon took the stage. They began their set with a whispering cello that was present in almost all their songs, helping introduce harmonic layers as well as signalling crescendos toward the end of several tracks. I was reminded of Arcade Fire’s “Neighbourhood #4 (7 Kettles)” from their debut album, Funeral. Woodpigeon made ingenious use of mixing techniques during their performance, which helped them layer instruments that their three-member band would be otherwise incapable of. Mark Andrew Hamilton, on lead vocals, had a very capable range, and their final song of the set was announced by a constant strum as rhythm was punctuated again with the cello.

Next up was Mt. A student Michael Duguay, who took the stage and immediately requested dimmer lighting for want of a more intimate atmosphere. He had great rapport with the crowd and promised some folksy tunes, and boy, did he deliver. His strength is in his vocals and in the freshness of his lyrics. He started his set off with a song about Canadian singer-songwriters and never looked back, moving into songs that recounted relatable, everyday anecdotes. His setlist, bolstered by his wonderfully self-aware lyrics and analyses of the average college-aged person and their exploits, paid keen attention to the scope of life: the funny and the melancholy, and how abruptly it can move from one to the other. His third song, Duguay promised, was “about getting too drunk to fuck,” apt for a Friday night, and contained a few disarmingly clever lyrics, among them, “I was speaking in tongues.” Duguay also shared some new material with the welcoming crowd, as well as the first song he wrote upon arriving in Sackville.

The evening’s final performers took more time to solidify their setup and didn’t begin their set until after midnight, but those who remained for The River and The Road didn’t regret it in the slightest. In Ottawa during their tour they met Caitlin Harnett, a singer from Australia, who began travelling and performing with the band. She was set to return to her homeland but made a last-minute decision to continue onward with the band. “It was only $60 to change my flight,” she said—well worth the price, in my opinion. The band’s harmonies were sublime throughout their set. Having The River and The Road conclude the evening’s performances was the right choice, too. Their setlist slowly but surely gained raw energy, building to a sensational climax.

It wasn’t exactly a packed house, but it more than deserved to be. Sackville’s music scene is one of its greatest strengths, and nights like this one are great reminders of that. They may just remind too few.