For the first time, Elliott Chorale is comprised of entirely treble voices 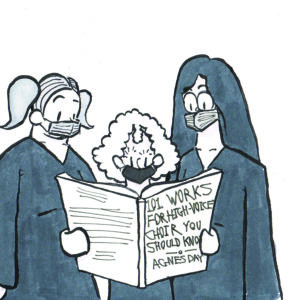 This year, Elliott Chorale—Mt. A’s auditioned chamber choir—will be completely made up of treble (soprano and alto) voices. In the past it has been a choir made up of sopranos, altos, tenors, and basses (SATB), but “primarily [due to a] scarcity of tenors and basses,” conductor Dr. Kiera Galway “made the decision for more consistency and a little bit of ease and [went] with treble voices only,” after some “tough sledding” with limited resources last year.

However, Galway doesn’t want treble choir to seem like the consolation prize: “To me, I think there is fantastic treble repertoire out there. I love working with treble ensembles, I love singing with treble ensembles. In fact, some of my best experiences have been with treble ensembles. So, I was actually kind of excited to explore that. It’s also something new for Mount Allison. I don’t think Elliott Chorale has ever been run as a treble choir, so it’s kinda fun to dig into a little bit more difficult repertoire there,” she said. Mélanie Dupuis (class of 2022), a BMus voice major who was in Elliott for three years and has gone on to pursue a masters in voice performance, thinks it’s a great idea. “It’s difficult to justify having advanced choir for SATB when we already struggle finding tenors and basses for Choral Society in a normal year. It makes perfect sense to me to make Elliott a treble choir as it better represents Mount Allison’s voice students and gives a chance for more of the voice students to participate in a more advanced choir. If you can only find two or three tenors and basses, that limits the [number] of sopranos and altos you can allow in the choir for balance reasons,” she said.

Both Galway and second year voice major Clare Lowe expressed fond memories for treble choirs. Lowe remembers “in [her] days of children’s choir we sung some admittedly cheesy music, but there was also a lot of cool stuff in all sorts of different languages, from all sorts of different cultures, and really cool harmonies, high energy pieces.” There’s a stereotype that treble choirs are only for children’s choirs and are therefore lesser than. However, Lowe touched on the fact that we don’t necessarily need tenors and basses to sing SATB music. “There are countless examples of all the nuns who sang full SATB music—there were some who had low enough voices to sing tenor or they would just put it up the octave, same with the bass, or they would just have an instrument do the bass,” she said.

Additionally, there are discourses on the association of treble choir and womanhood. While Galway expressed that she had experienced that community of femininity and female solidarity, she thinks “it’s important to think critically about those discourses, especially given the range of gender expressions and identifications you have in Elliott.” It is important to note that not all treble voices are women, and not all treble voices are assigned female at birth (AFAB), just as not all lower voices are men or assigned male at birth (AMAB).

This brings up an interesting conversation on gender roles in choral music. Lots of choral music relies on the assumption that treble voices are women and lower voices are men. An all-treble choir shifts some of those traditional gender roles. In my experience as an Alto II (the lowest treble voice), in a SATB choir I’m in the middle of the texture, but in a treble choir I am the foundation that grounds the harmonies. The Alto II line takes on the bass role, and that is powerful. Additionally, for Galway, “as a conductor who identifies as a woman, that’s certainly something I’ve thought about in the past because conducting has traditionally been gendered masculine although music teaching and teaching singing is gendered feminine. There’s a little bit of that tension there, and a lot of that has dissipated as I’ve gotten older and more confident, but certainly at the beginning working with especially tenor bass voices, […] I don’t think I was respected as much.”

Galway also spoke about how this related to the repertoire, as she noticed that much of the treble choir music is composed by woman-identifying composers, further creating the enforcement of boundaries for women in choral music. However, there is hope. “I think that the discipline is coming along really well in terms of talking about some of those disciplinary boundaries and talking about promising practices. […] We’re seeing more articles, more awareness of gender expansive singers and promising practices for talking about music and talking about singing that doesn’t alienate or cause any gender dysphoria,” said Galway.

The enforcement of binary gender roles in choir as well as a scarcity of lower voices create a patriarchal hierarchy where it is easier for lower voices to succeed. “There is a lot of focus on how to welcome tenors and basses and […] voices that will eventually be tenors and basses, […] starting at the middle school level and working with changing voices throughout middle school and high school, and absolutely, that is important. But I think that discussion can sometimes happen at the expense of treble voices and often those treble voices map onto female-identifying bodies,” said Galway. She also spoke to the way this has influenced choral canon, saying “I think few treble pieces have truly made it into the choral masterworks lists, probably for a host of reasons we can attribute to the patriarchy, and it’s possible that having TB singers offers access to that canon/status in a way that treble voicings do not?”

Lowe explained how the choral value of tenors and basses is also apparent in opera. She described a summer program that we both attended, along with Dupuis, fourth year voice majors Annika Williams and Amanda Godin, and 2014 Bachelor of Music graduate Colin Frotten. “We just came back from [the Halifax Summer Opera Festival] and it was clear it had been a struggle to find tenors and basses and that’s apparent by [the fact that] they had to hire Colin, who was great, but they had to hire him and actually pay him, and he got paid to do a program that the rest of us were paying to be in because there’s such high demand.” Colin was hired to play the lead male character. Additionally, he’s a particularly interesting case study. He was in Elliott Chorale during his time at Mt. A, and was a choral manager. Now, he works for Choral Canada. Access to choir clearly did him good; he is an Elliott Chorale success story. However, the complexities of intersection of voice type, privilege, and opportunity are difficult to succinctly wrap up.

Choir brings people together. It creates communities that last lifetimes. This year’s Elliott Chorale is sure to be exciting. According to Lowe, “we’re going to do music that caters towards the people we have and not go to great lengths to get the voices that we don’t have.” Elliott’s first concert—“Journeys,” will be on Sunday, October 30 in Brunton Auditorium at 3pm and is free to attend.