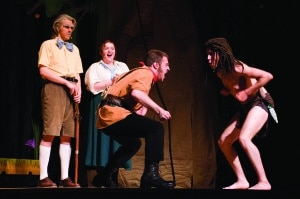 Putting together a large-scale musical theatre production is never a simple task, but this year’s Garnet & Gold musical, Tarzan, visibly surmounted any challenges that a weekend-long show could present. The final production was fulfilling and rewarding, and demonstrated the enthusiasm and pride of those involved.

The energy and intensity began before the performance officially started: The pit band introduced their role early, immediately setting the tone with engaging music and capturing the audience’s attention. The band established themselves as an integral piece of the performances, highlighting perfectly how all of the show’s components complement one another.

A variety of moods through an extensive range of unique characters culminated together to put forth the play’s main theme: finding one’s true family. Tarzan, having been raised by apes, encounters difficulty deciding if he belongs with gorillas or humans. The music emphasizes this ongoing dilemma through songs such as “Strangers like Me” and “Two Worlds.” The show opened and closed with the latter song, which investigates the differences and similarities between the two species.

The scenes were engaging and dramatic without relying extensively on stage design, with the exception of a spider web and Tarzan swinging on a vine. Instead, characters such as Terk and Kala, Tarzan’s childhood friend and adoptive mother, respectively, were often the centre of attention through solos or deep dialogue. Appropriate for a play centred on family, the actors sang with compelling and delightful tones. It is worth mentioning the perseverance the leading vocalists endured, maintaining energy and authenticity throughout vocally demanding sections.

The cast conveyed the playful nature of the Disney source material while maintaining an intimate connection between the characters. The actors efficiently shifted between atmospheres and mindsets, adding more excitement for the audience. By alternating perfectly between lighthearted and serious moments, the cast kept the familiar Tarzan story suspenseful and entertaining throughout the entirety of the show.

The pit band was a key driving force in drawing out these emotions. Their presence was found through Phil Collins’s thrilling score, capturing and supporting the intensity for each scene and resulting in a captivating mixture of acting and music. This was achieved through roles such as a vibrant conductor, a rhythmic and lively percussion section, and the melodic themes in the wind and keyboard sections.

Immediately apparent were the cast members’ unified efforts in bringing out Tarzan’s characters. The two Tarzans – which saw the young and old versions perfectly matched – convincingly presented the challenge of finding one’s true family. The other characters added their own unique positions in the development of a story filled with laughter, anger, pleasure, curiosity and more.

The aspect of discovering family and community was evident not only in the acting, but also in the process of putting together such a production. It was a show that brought together individual personalities, entailing an abundance of time and commitment, and without any doubt formed a strong bond amongst everyone involved.