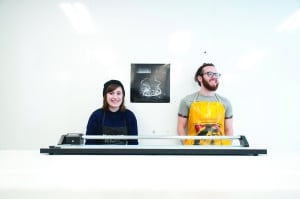 Though neither of them are fine arts majors, Ben Dickey and Allison Grogan can nevertheless be found haunting Mount Allison’s photo department. Recently, the duo collaborated on an exhibition they titled “Here, Still,” which explores themes of absence and loneliness through self-portraiture.

The exhibition is both Dickey’s and Grogan’s START Gallery debut, after five years at Mt. A.

“Both of us spent a lot of time in the photo department compared to our other departments, so I think it warranted putting some stuff on the walls,” said Grogan.

Grogan graduated last May, completing a degree in anthropology. She reapplied to Mount Allison in order to take an independent study in photography with Karen Stentaford. On top of that, Grogan works as a technician and assistant in the photography department.

One of Grogan’s photo series, titled Stress/Relief, features Grogan in her apartment, taken using a long shutter cable release. Grogan’s pieces tell her story of the working process and how she comes to begin projects.

“It’s the hardest part about photography for me. I have to do something and it has to be perfect immediately, which is totally unrealistic,” said Grogan.

“For me, self-portraiture can be an outlet when it’s hard to start projects,” said Grogan.

In addition to human subjects, Grogan also works with landscapes, especially in the form of diptychs. Both pieces in her series titled Recession, for example, present two photos of the same landscape, with Grogan featured in one and absent from the other. The series echoes an earlier project of hers, At Home, which is contrastingly set indoors.

“I’ve always kind of liked the juxtaposition of two photos beside each other,” said Grogan. “[The series] shows you how figures change the landscape.”

Dickey, an international relations student in his fifth year, plans to complete his degree by this May. His pieces in the show all come from a series of his work called Absolute Loneliness taken in medium format using a Holga, an inexpensive type of camera without many complex features.

“[Working with a Holga is] fun because there’s a lot of technical considerations with photography,” said Dickey. “Using a Holga is liberating because you only have two shutter speeds, and you just go for it.”

Dickey’s pieces share a common theme with Grogan’s work. “I would call [my work] reflective self-portraiture,” said Dickey “It’s expressing yourself through the environment that surrounds you.”

Dickey’s black-and-white series tells a story of loneliness, exploring environment and a sense of identity.

“I looked for things that externally reflected the feelings that I had internally,” said Dickey. “It’s almost like empathy from your environment, when you feel unconsoled or sad, to see things that physically seem that way as well.”

Dickey and Grogan have known each other for a few years, but this is the first time they have collaborated on an exhibition. The two plan to continue to work together once the show is finished.

“It’s been awesome; I feel like we’re married, in a nice platonic way,” said Dickey, to which Grogan promptly rolled her eyes.

“We have a good working relationship,” said Grogan. “He’s really into digital manipulation and digital editing, which is stuff that I’m not necessarily well-versed in. We work well together because we’re both good at different things.”