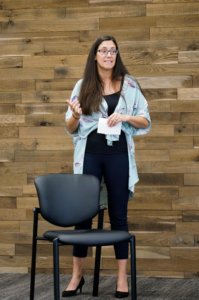 Last week in the Windsor Hall Grand Room, a small crowd of Mount Allison students and professors gathered to hear three talks on the theme of impact in the speakers’ respective fields.

First to speak was James Kalyn, a professor of music who examined the impact of live music on the listener, the performer and the culture at large. “As soon as they said ‘impact,’ … it just hit me: I thought [of] the impact of live versus recorded music,” said Kalyn.

“There is a significant increase in the impact when we experience live music as a listener, [largely] because of the physical sensations, the social connection, the visual stimuli that go with it, [all] the various kinds of multimedia [and] multi-sensorial things that come together,” Kalyn noted. He encouraged the crowd to seek out opportunities to experience live music.

Margaret-Ellen Messinger, the department head of mathematics and computer science, spoke on the influence of mathematician Paul Erdős in their field. “He really turned [mathematics] into a more social experience,” said Messinger, explaining how Erdős travelled from one place to another during his career, working and collaborating with many mathematicians. “He was a great person to work with; he would work with PhD students, undergraduate students [and] esteemed colleagues.”

“I think some disciplines are naturally more social than others and we think of mathematicians as being very antisocial people – and we often are,” admitted Messinger. “[But] if you work with people you can get that [idea] much further.… You’re sharing new and different ideas … and just like working in any group, the end result can be so much better than working by yourself.”

Last to speak was Karen Crosby, an assistant professor in the biology department. Her talk was on the impact of culture in her own life, particularly the impact of animal consumption on human health, the environment and animal welfare.

She asked the audience why people eat meat, and then proposed three reasons why we should consider cutting back on both meat and dairy products. She first talked about research that suggests that plant-based diets are healthier, before moving on to “the unquestionable evidence that raising animals for food has a devastating impact on the environment.” Lastly she touched on animal welfare and how animals are often raised in factory farms before being sent to the slaughterhouse.

“I think that many of us don’t think about where our meat comes from. It’s easy to go to the grocery store and pick it up,” said Crosby. “It’s neatly packaged and there are euphemisms – we talk about beef and pork instead of cow flesh and pig flesh. So I just think it’s important to get people to think about it a little bit more. Any decrease in the consumption of any type of animal product is better for our health, is better for the environment, and it’s definitely better for the animal.”

Although vastly different talks, each offered a unique perspective on the idea of impact. Kalyn’s talk questioned the effects of live music on the people involved. Messinger covered the impact that a single person can have on an entire discipline while Crosby questioned the need for meat and dairy products in our diets.