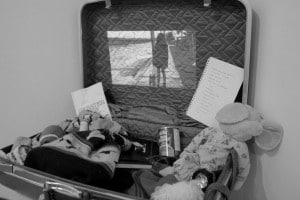 “It kind of depicts a love-hate relationship I have with this place that I inhabit,” fine arts student Nelligan Letourneau said about her START exhibition, “Sequestered in Sackville.”

The exhibition explores the mixed feelings Letourneau has acquired about Sackville during her time at Mount Allison. She said that the use of the word “sequestered” – defined as the feeling of isolation – is not necessarily negative.

“I’m purposely sequestered here at the same time,” Letourneau said. “I could leave, and I don’t.”

The exhibit includes a variety of media, including painting, drawing, poetry and video. An installation piece, Trying for a Train that Won’t Stop, shows an open suitcase filled with various items.

An 11-minute video is projected inside the suitcase. It depicts Letourneau packing the suitcase and standing by the train tracks, waiting for a train to stop in Sackville. Even when a train passes by her without stopping, she continues to wait.

“I’m projecting the video into the suitcase to represent how I’m actually literally stuck within this space,” said Letourneau.

Letourneau said the piece was inspired by the idea of a child filling a bag with impractical items and running away from home, only to return shortly after.

Some featured items include a can of baked beans, a loofah, books and DVDs, and her great-grandfather’s sweater. She said that the sweater is a cherished item, and not something she would realistically want to wear every day if she ran away.

“So it’s kind of redundant to bring [the sweater] with me,” said Letourneau. “[They’re] ridiculous things, but things that mean something to me.”

“Constellation of Stars” is a poem inspired by a conversation between Letourneau and her friend about their stretchmarks, in which she said, “I wish my stretchmarks could glow in the dark.” The poem is accompanied by a stop-motion piece, Imperfections Illuminated, which represents the self-confidence that Letourneau has gained in Sackville.

In three pieces that depict Letourneau’s house in Sackville, she explores the idea of home and how it can change. She said she had considered the difference between a house and a home, and whether she cares about the physical space as much as the people inside it.

Letourneau had previously done a séance performance piece in her house. Two paintings, Haunted Pt. 1 and Haunted Pt. 2, represent the spirits that could reside there.

“It’s the idea of the performance living on past its actual performative action,” said Letourneau.

A papier-mâché piece, House, depicts a disfigured representation of the same house. Letourneau said it represents the home as not necessarily being an attractive place.

“Maybe it isn’t a place of refuge. Maybe it is. Maybe it changes daily,” said Letourneau. “[I’m] just exploring what home means.”

Letourneau said she was inspired by the impact that living in Sackville had on her life, both positively and negatively. She said she also felt that the exhibit would be relatable to others who have similar experiences in moving to Sackville.

“Sequestered in Sackville” will be on display at START Gallery until Feb. 2.