Mt. A to stage feminist rendering of classical myth 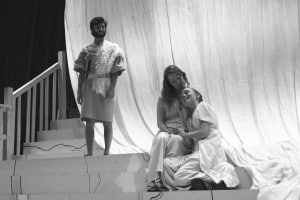 For the cast and crew of the Motyer-Fancy Theatre’s upcoming production, The Love of The Nightingale, theatre is not  a spectacle, but a social tool to start discussions on relevant social issues.

Cast member Victoria Valliere is doing an internship project surrounding The Love of the Nightingale, aiming to start conversations about the play’s central themes.

“The themes I keep seeing throughout the play are gender violence, victim blaming, shaming, silencing,” said Valliere. “And the playwright herself has said that the play is not just about men and women, it’s also about countries.”

As the main portion of the project, Valliere organized a panel discussion to address these themes. Women’s and gender studies program director and psychology professor Lisa Dawn Hamilton, sexual harassment advisor Melody Petlock, drama department head Glen Nichols, and The Love of the Nightingale director Andrea Boyd will lead the discussion, with moderation by Christl Verduyn.

“We hope to really continue the conversation that’s been started and ask questions, which is kind of the thesis of the play in a way,” said Valliere.

Following each performance, audience members will also have an opportunity to reflect on and engage with the play’s themes. Origami birds will be displayed outside the theatre, and viewers may write comments on the wings of each bird. Valliere will also accept artistic responses, like drawings or poetry, to be published in a book in the weeks following the show.

“A play only exists for a time, but its impact can reverberate through the community,” said Valliere, inviting the public to “help continue the story” through these responses.

The Love of the Nightingale is based on a Greek myth, the story of the rape of Philomela. It follows two sisters, Procne and Philomela, and Procne’s new husband, the warlord Tereus.

“[Procne] leaves with her new husband and calls on her younger sister to come to live with her,” said Franziska Glen, who plays the role of Procne. “And when her husband goes to pick her up, all sorts of things start to happen.”

Glen says that one of Procne’s key characteristics is her tendency to follow the rules of society, not questioning anything until it’s too late.

“This character, this play as a whole, it’s storytelling, but it’s storytelling with a very conscious goal of being a catalyst for conversation,” said Glen. “But also to realize that this has been happening forever. This violence, this injustice, this continual theme.”

Glen said that the play’s themes are especially relevant to the Mount Allison community given proposed funding cuts to the women’s and gender studies program.

“This is my form of activism,” said Glen. “Storytelling is how I am communicating my distrust with this society.”

Xavier Gould, who plays Tereus, said he was intrigued by his character’s complexity.

Gould says he feels theatre is sometimes underappreciated on campus. By addressing the play’s serious themes, he also wants to break the stigma of theatre as “pointless entertainment” as opposed to a tool to examine social issues.

The Love of the Nightingale runs Feb. 10-13 in the Motyer-Fancy Theatre, with the panel discussion open to everyone on Friday afternoon.