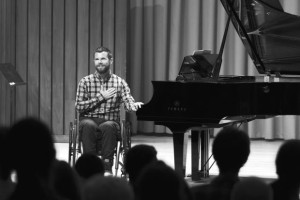 Last Friday, Mount Allison’s music department kicked off the semester with the Faculty Gala Concert, an annual showcase of the diverse abilities of the department’s distinguished faculty. Featuring a wide variety of instruments, sounds and selections, students and Sackville community members alike gathered in Brunton to enjoy an overview of faculty talent at Mt. A.

This year’s event was especially significant thanks to a guest appearance by Scott Jones, a graduate of Mt. A’s music program in 2008. In October 2013, the musician and choral director was attacked in New Glasgow and left paraplegic. Jones believes he was attacked because he is gay, and founded the Support Scott Jones fund and the Don’t Be Afraid campaign soon after. Since the event, Jones has become an outspoken opponent of homophobia and an inspirational figure, and his campaign has garnered much support from all over Canada.  In place of an admission fee, the Faculty Concert encouraged donations to the Support Scott Jones fund.

Before playing a short piece for solo piano to start off the evening, Jones received a thunderous applause and a standing ovation the moment he appeared on stage. He also introduced the piece as a source of comfort and solace after the incident, and described his process of recovery in musical terms: “Even when life seems most dissonant,” Jones said, “there’s always a resolution.”

The concert was also a milestone for the newest member of the Faculty of Music, Professor Colleen Skull, as the evening was her inaugural performance on the Brunton stage. Having previously studied and taught vocal performance at the University of Toronto, Miss Skull appreciated the small-town atmosphere of Sackville, and said that even the humblest beginnings can produce the most talented musicians. “There are many phenomenal artists that lead their communities in multiple ways,” said Skull during an interview. “You can reach levels of performing excellence without ever singing at the [Metropolitan Opera House].”

At the Faculty Concert, Skull first performed a rendition of Strauss’ “Zueignung No.1,” a composer with whom she is intimately familiar after starring in the lead role of Pacific Opera Victoria’s production of Ariadne auf Naxos this past February. She then performed “Dich, teure Halle” from Wagner’s Tannhäuser, a song that served to highlight Skull’s commanding vocal talent and as a way of addressing Brunton itself with the song’s final lyric: “You, dear hall, be greeted by me.”

Skull’s philosophy is that opera and classical music remain relevant today because the emotions they convey continue to be experienced in a contemporary setting. “These stories are timeless,” said Skull. “Opera is often seen as superfluous or for a certain crowd, but it is [the performers’] duty to make it relevant, because it is relevant.”

The evening’s program continued with various selections, each showcasing the tastes and talents of each faculty member. David Rogosin, for example, performed two Brahms pieces for solo piano that allowed him to demonstrate his ability to convey emotional depth. Often, pianists struggle to embody the complex range of expression that characterizes Brahms’ work, but Rogosin expertly navigated these pieces, allowing the audience to savour each carefully crafted note.

While many of the performances featured more classic or traditional pieces, percussion instructor Joël Cormier took it up a notch in the second half of the evening with a rousing rendition of Iannis Xenakis’ avant-garde masterpiece “Rebonds.” After surrounding himself with an array of bass drums, bongos, and toms, Cormier began to strike at these instruments in a precise yet seemingly sporadic fashion. These bursts of percussive energy were punctuated by brief yet deafening silences, which almost served as an inverse rhythm that held the otherwise unpredictable music together.

Throughout the evening, collaboration was a recurring creative element. From the piano accompaniments of Stephen Runge to the unique pairing of clarinet and guitar, the various performances accentuated the strong musical relationships within the department. Once again, this annual event delivered a memorable lineup that has set the stage for another great year for Mount Allison’s musical community.