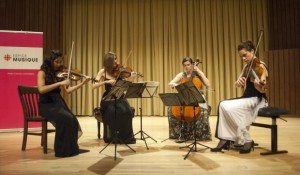 In this year’s second instalment of the annual Performing Arts Series at Mount Allison, the distinguished Cecilia String Quartet took to the Brunton stage for a concert in conjunction with the Debut Atlantic tour. Originally founded in 1979, Debut Atlantic is committed to bringing the talents of Canada’s rising musicians to the Atlantic region to both provide performing opportunities, and to promote education and appreciation for classical music. Students, staff, and community members gathered attentively in the auditorium on Saturday, Nov. 2, for an enjoyable evening of music by some of history’s most inspiring and memorable composers.

The Cecilia String Quartet was formed at the University of Toronto while all four members were students there, and derives its name from Saint Cecilia, the Roman patroness of music. With Min-Jeong Koh and Sarah Nematallah on violin, Caitlin Boyle on viola, and Rachel Desoer on cello, the quartet is a blend of unique personalities and backgrounds that come together in a brilliant and cohesive display of musical talent. The quartet has recently gained significant attention and acclaim, and are currently the Ensemble in Residence at the University of Toronto’s music department.

Through their performance of classical music for string quartets by Haydn and Mendelssohn, the group quickly and confidently demonstrated their adept understanding of subtlety and masterful ability to use a piece’s dynamics to harness its full emotional effect. The quartet continued with a an interpretation of Anton Webern’s “Langsamer Satz,” an evocative and complex piece that was featured on the quartet’s second CD, entitled Amoroso, that was released in the spring of 2013. As Nematallah explains, the album was “inspired by passionate and devastating love stories” from the lives of the composers.

The concert also featured a performance of “Kitchen Ceilidh,” a more contemporary piece by Abigail Richardson-Schulte that was composed specifically for this tour of Atlantic Canada. Inspired by the sounds of Cape Breton folk music and the personal playing style of Nova Scotian fiddle legend Natalie MacMaster, the piece attempts to infuse the classical quartet style with the sounds of Cape Breton and the casual atmosphere of a ceilidh, a traditional Gaelic gathering involving music and dancing that is still widely held in homes and festivals across the Atlantic provinces.

While the quartet’s performance of this piece was flawless and engaging, the composer’s choice to blend classical aspects with a traditional East Coast flavour left a disappointing taste. It was somewhat uncomfortable to witness an awkward incorporation of folk elements, like foot-tapping and whooping, into a piece that still lingered safely within the conventions of classical composition.

Some students were quick to voice their disappointment in the performance of this piece: “I wasn’t a fan of it,” remarked Heather Shilton, a third-year geography student and Toronto Symphony Orchestra enthusiast with a history of musical performance, “there was something about it that just didn’t fit.” Although attempts to merge the fancy with the folk have undoubtedly been successful in other instances, this piece simply does not appear to be one of them.

Despite a minor exception, the Cecilia String Quartet demonstrated their musical excellence and passionate dedication to a diverse array of styles and composers. Once again, Mt. A is fortunate enough to welcome world-class musicians to its stage through its Performing Arts Series, a trend that will continue with the Cadence vocal quartet on Friday, Nov. 22.