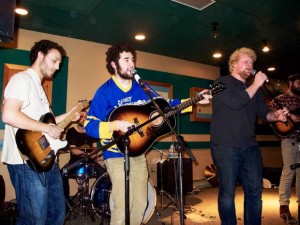 Shows that ran through the evenings this past week marked the main portion of the Stereophonic Music Festival. Although the odd set came off as not quite right for its context, the local festival was on the whole well organized and the evenings proved memorable.

On Wednesday, the festival began in abrupt fashion with Lucas Hicks’ short fifteen minute set at the Legion. The lo-fi indie rock was up to his usual standard but there was simply not that much of it and the set as a whole had a feeling of hurriedness about it. B. A. Johnson was, as usual, quirky and unique. The Hamilton native, Sackville regular brought back a collection of his old songs that remain funny even after repeated performances, while songs off his new album added some diversity, and a string of new antics to loosened up the Legion crowd before ending his set in the guy’s bathroom with a quick song atop the sink. Max Grizzly and the Entertainment managed to maintain the excitement level through to the end of the night even bringing about a surprising mosh pit. The surprise was due to the folkier aspects of their music but lessened as the folk elements of the total sound faded out to be replaced by something closer to alt-rock.

The second night featured Good Things, Walrus, and Grease Beast at The Pond, which followed an uncomfortable set in the chapel. The bands, despite being a diverse matching of genres, really worked well together. The speedy punk of Good Things was tempered by the marching psyche punk of Walrus, and led perfectly into the large and heavy hardcore punk of Grease Beast. The sets were a constant build that gave a real sense of progression, although each individually stood out with highlight moments. Good Things were remarkable in their dedication to having fun; Walrus had a good measure of balance between the explosive punk and the builds in between; and Grease Beast demonstrated masterful screaming and terrifyingly amazing musicianship.

Friday night featured a massive five band show at George’s Roadhouse. Halifax’s The Grubbies began the night with pop-punk that started off predictable and formulaic, but quickly evolved into some catchy songs with unique, fast-paced lyricism. Weird Lines, a Sackville super group featuring Julie Doiron and Jon McKiel to name a few, set didn’t really eclipse the individuals on stage but nonetheless was exciting to watch if not for the amount of Sackville star power that was on stage. Construction & Destruction had a typically good set but stood out in the night as slower paced and more careful than the rest of the performances. The Mouthbreathers, who played the penultimate set, were an especially odd juxtaposition with the previous band but the songs that everybody knew the lyrics to quickly erased all chance of the night feeling out of whack. Julie Doiron and the Wrong Guys ended the night on a loud and heavy note, acting as the synthesis of the two previous bands.

The final night had two evening shows. In the first, Boxers put on a great show with some masterful work on a looping pedal giving them the sound of a huge band at points. Wooden Wives’ set opened up with fast and relentless hardcore punk that tailed off toward the end, only to set up an explosive final track that stood out because of the addition of saxophones to the fold. Jerk Damaged finished off the show at Struts with punk songs that went far beyond the typical three chord stuff in complexity and depth. The party then proceeded down Lorne Street to George’s Roadhouse for the second show.

Kappa Chow kicked things off with a great set that included a fantastic, solo driven rendition of their well-known “Punk as Fuck.” Nap Eyes’ laid back alt-rock slowed things down, nicely transitioning to the slow and melodic alt-country musical mosaics of Fiver. Schmidt’s set was layered with effects and emotionally pervasive, with a strong voice running through the abstract stories her lyrics express. It all ended with a second set from Steve Lambke, who played again under the name Baby Eagle, and was backed up by a trio of local artist presenting his varied, yet palatable, indie rock.