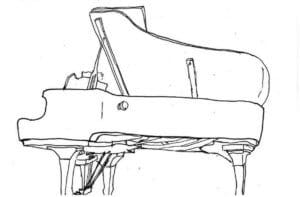 Student recital season is in full swing, with the first of many successful recitals having happened last weekend.

Every March and April, music students from different disciplines and years of study display the hard work they’ve put in throughout the entire school year in the form of a recital. For each student, there is a different reason and motivation behind preparing for this type of grand end-of-year performance.

“Doing a recital is a really big achievement for students, whether or not they plan on doing a career in performance,” said third-year vocalist Emily Steers. “For some instrumentalists, there’s not a lot of opportunity to perform solo repertoire; it’s a great chance to get to do that in a professional and supportive context!”

Students can either do an uncredited recital (typically in their second year or later) with approval from their professor, or upper year students can do a recital jury earlier winter term. If a panel of professors deem that they meet the requirements for a professional quality recital, successful candidates will do a half-hour or full-hour recital for credit, replacing an end-of-year jury.

A typical weekend during recital season consists of at least one recital, and sometimes multiple performances over the weekend or even more than one recital within a day.

For some graduating students, performing a recital for credit is important, as it makes grad school applications look much stronger and more polished. For students going into music education or a non-solo performance stream, a recital is a fun way showcase the growth they’ve made as a musician.

In addition, an uncredited recital is the perfect opportunity for students to have repertoire performance ready for end-of-year jury in April.

“The process of preparing for a recital jury was fairly intense,” said Steers. “We have to have all of our repertoire ready to a decent performance standard, meaning that we have to go above and beyond the regular repertoire requirements of our applied music classes.”

Other students are simply thankful to have the chance to do a recital regardless of whether or not it is being graded.

“Uncredited recitals are no different from the recitals being given by those who were chosen by the school,” said third-year tuba player Bryenton Innes.

Planning a recital requires lots of preparation, some of which goes beyond learning the music.

“Some things that are involved in the planning process are creating a programme, writing program notes, picking a gown or suit to wear, getting pictures done for advertising, creating a poster, inviting people to the recital and organizing the reception that follows your recital,” said fourth-year voice student Madeline Duffy.

Student recital season is a great opportunity for students to perform a varied selection of pieces, and a chance to be exposed to works and composers they wouldn’t otherwise have been drawn towards.

“I was inspired as a WGST student to use my recital as an opportunity to showcase all of my favourite women composers that often get overlooked by the musical canon!” said Steers.

Music students at Mount Allison are very supportive of each others’ performances. One regularly established practice amongst students after performances such as collegiums and student recitals is waiting outside the green room until the performers come out and congratulating them on their performance. In addition, students will often let their peers know whenever they’ve seen improvements between performances and studio classes.

“Be confident in your ability and recognize a recital as a personal accomplishment,” said Duffy when asked what advice she would give to students doing a recital for the first time.

I personally will be making an effort to attend every student recital. I hope you can find the time to attend a recital, and encourage your friends to come hear the talent that the music department has to offer.