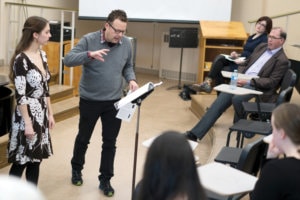 On Nov. 22, Sackville was treated to a full day of learning and listening from one of the world’s top baroque ensembles. Tafelmusik is a 17-member baroque orchestra based in Toronto, specializing in early music and performing on period-based instruments.

Students and community members took part in a masterclass, a presentation and pre-concert lecture, finishing off with an inspiring evening concert inside a packed Brunton Auditorium.

The day began with an afternoon masterclass with violist Patrick G. Jordan and oboe player Marco Cera. Students had the chance to receive feedback on repertoire that they are working on this term. A variety of music students participated, including wind instrument players, a vocalist, a pianist, organist and members from the Elliott Chorale.

The guest clinicians shared their knowledge of the baroque period to their best ability, even though they didn’t specialize on any of the instruments played by the participating students.

Shortly after the masterclass, a Colloquium Musicum presentation took place in Brunton Auditorium. Oboe player John Abberger gave an introduction on how J.S. Bach’s music would have been heard.

The much-anticipated concert, one of Tafelmusik’s four fully memorized programs, concluded the events, an addition to this year’s Sackville Festival of Early Music.

“It was easily one of the best performances I’ve seen in my three years at Mt. A,” said third-year voice student Emily Steers. “This year’s Early Music Festival as a whole has been without parallel.”

From the opening sounds of the concert, the audience was immediately drawn to their stylistic approach to the J.S. Bach–themed program. The ensemble performed with excellent coordination and it was clear that they had the music internalized. One could tell that they were having fun with the music.

The concert was unconventional in the sense that it did not progress in the usual format to which classical concert listeners are accustomed. Narration was interspersed in between the featured works, with images projected on a screen.

“The combination of interesting and informative visuals, a narrator to help contextualize the music and the way that the musicians themselves moved around onstage based on instrumental relationships in the music made it so much more compelling,” says fourth-year voice student Kaye Klapman.

The discussion of coffeehouse-style performances, described as informal performances, was implemented into the performance. Violinists from the ensemble performed Bach’s Partita for violin in D Minor, BWV 1004: Allemande from various locations within a dimly lit Brunton, from in an aisle on the main floor to in a stairway in the balcony. Their impressive and seamless transitions between the violinists came across as one soloist even though the work was divided up among multiple violinists.

“These world-class performances in our small town showcases how much our school works on opportunity for its students, and how we are recognized on the larger scale of the musical community,” says third-year tuba student Bryenton Innes.