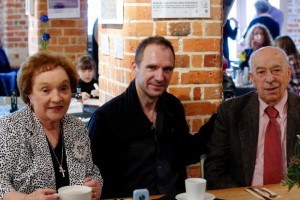 I can’t remember the last time I saw a movie that was truly hindered by its editing, despite high-quality performances. The Invisible Woman is just such a movie.

The film follows a married schoolteacher named Nelly, played by Felicity Jones, as she is haunted by memories of a past love affair with Charles Dickens, played by Ralph Fiennes. It’s through Nelly’s reliving of her relationship with Dickens that the main narrative of the film is shown.

As I said before, the performances in the film are quite good. Felicity Jones does a compelling job as both an emotionally distant middle-aged woman and vulnerable teenager. The supporting cast performs more than adequately. But if this movie is one thing, it’s Ralph Fiennes’ show. He directs it and, even though Felicity Jones gets more screen time, he is its star. Fiennes does a fantastic job as Dickens; he is at once jovial and pained. In many ways Dickens is like a child in this, with all the positives and negatives that come with that label. It is Fiennes’ performance that really sells the movie as a whole, and without him everything would be fairly lacklustre.

The main problem I had with the movie is its pacing. This is due in part to its editing. Usually, the point of editing in film is to make itself inconspicuous and when it doesn’t, it usually makes it self known to make a point. In Alfonso Cuaron’s Children of Men, there is a scene where no cuts are made; the entire scene is done in one take, from one angle. In a fast paced movie filled with quick cuts, which is the norm nowadays, this scene establishes a sense of gravity simply through its editing, or lack thereof. At many points in The Invisible Woman, it seems that the filmmakers are trying to achieve a similar tone through similar means; however, they’re unsuccessful. Many of the transitions between Nelly’s present life and flashbacks are bookended with lingering shots focusing on her face or of her walking along a beach. This is done because the filmmakers want to establish the emotional turmoil Nelly is experiencing in reliving these memories; her struggle is supposed to show in the pained expression of her face, or the difficulty with which she walks. I say all this not because that’s the effect, but because what the filmmakers were trying to say was painfully obvious. What you get instead is many shots that last too long, capturing some of Jones’ less emotive moments. The result is a film that seems to chop itself into very definite sections, some quite interesting and some less so. This effect messes with the pace of the movie.

The Invisible Woman is an interesting movie. It has some great performances that are marred by distracting editing. At times the film seemed like a series of short films, or, more bleakly, a series of false starts. By the film’s end, I felt more than a little conflicted. There was an obvious amount of good work put into this: the story was, at least most of the time, very interesting; the acting, especially by Fiennes, was quite good. However, the choppy nature of the film kept it from gaining any really narrative momentum or even finishing in a satisfying way. Despite all its good parts, The Invisible Woman left me bored.