Though she be but little, she is fierce 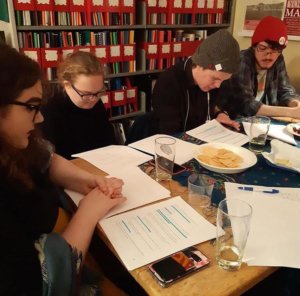 In the quiet basement of the Crabtree building, among the bright, sterile lights and a mysterious pink computer chair at the end of the hallway, there’s a little world split between rooms B10 and B11 that is, while petite in size, an insanely valuable resource for students. It’s here that you’ll find the PARC Script Library, home to over 800 plays and musicals written by Atlantic Canadian playwrights.

Before getting lost in a script, though, you should probably understand what the Playwrights Atlantic Resource Centre (PARC) is. PARC is an organization that provides resources for aspiring, emerging and established playwrights in Atlantic Canada. Founded by Wanda Graham, it provides resources for playwrights to perfect their pieces. PARC provides services like the home delivery program (which connects playwrights with dramaturges who will read over their script and provide professional feedback on the piece), script translations from English to French and vice-versa (other languages are also available upon request) and the annual Playwrights Colony, their most well-known event, which brings a group of playwrights together on the Mount Allison campus to work on a self-written script of their choosing for two weeks each spring.

Working amongst the hundreds of Atlantic Canadian scripts are the staff members of the library: the lovely library, membership and communications coordinator, Meg Edwards, and I, the trusty student intern. Edwards, whose father wrote his doctorate on the history of theatre in Canada, was excited to see the job posting for PARC; she has been surrounded by theatre for her entire life.

“I love that PARC works so hard to develop the voices of emerging playwrights,” she said. “There are so many interesting stories out there, and it is exciting to think that one of the things the Atlantic region can offer our local population and visiting tourists is a thriving theatre scene with excellent original works from local playwrights.”

Even though the PARC Script Library is hidden away on campus, it is not trying to hide away from students. The student thespians are always invited to come explore the library and read a script, ask questions or even just have a chat with the friendly PARC staff. There are even PARC memberships available to students, which gives them access to all of PARC’s amazing resources, for the price of $15 annually.

“It is very exciting to see young students discovering playwrights that live only hours away from the campus,” said Edwards. “It is wonderful, too, to be able to contact the playwright and let them know that a student wants permission to use their script.”

Want to learn more about this organization? PARC frequently hosts events for Sackville’s passionate thespians and theatre geeks, including at least one student-led reading of an Atlantic Canadian script per semester. Join Meg, the fabulous student readers and me in the script library on Friday, March 6 from 12:30 to 2:30 p.m. for a bite to eat and a reading of The Numbers Game by John Spurway. The Numbers Game tells the tale of a lost connection, the life of a divorcee and a struggle that students know almost too well: trying to find a roommate who won’t make you want to rip your hair out.