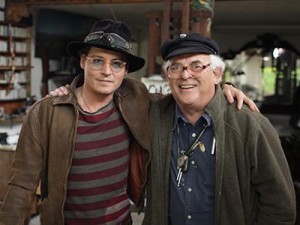 For No Good Reason explores art and politics.

“Cartooning meant more to me than to make funny pictures. It meant to change things for the better,” says British artist Ralph Steadman in the documentary about his life, For No Good Reason.

The film begins with Johnny Depp talking about his knowledge of Ralph Steadman, and his desire to visit the artist and to learn more about his career and artistic process. It shows Steadman’s rise to fame in the early 1970s, beginning with his professional relationship with journalist Hunter S. Thompson. The film also stars Ralph Steadman and Johnny Depp as themselves, and features music from Slash, All-American Rejects, Jason Mraz, and others.

The fact that Steadman relates closely to Thompson is evident in his artwork. Thompson practiced a “Gonzo” style of journalism, an approach that focuses on subjective and personal experience, satire, and social critique much more than objective journalism traditionally does.

Meanwhile, Steadman’s artwork became known for being bold, unconventional, and politically driven. In the film, Steadman explains that he uses his art to fight authority because “authority is the mask of violence.” For this reason, his work has been published frequently in Rolling Stone.

Visually, the film is stunning. The use of different camera techniques and angles keeps it consistently interesting, and even the smallest clips – like dipping a paintbrush in a cup of water – come together in a way that flows nicely. Furthermore, much of what appeared on screen did not focus on Steadman himself, but on his artwork. Montages throughout the film show examples of his art in different stages of his career.

In one scene, Steadman shows his entire process, creating a painting from start to finish. He starts by throwing a few paint splatters of varying colours on the canvas; from there, he works with the shape and colour of these paint splatters, building onto them using a few different materials and techniques. To an outsider, the whole process may seem random and improvised; to an extent, it was, and yet Steadman worked with a look of confidence and certainty in what he was doing. His style and technique, he says, is influenced by Vincent van Gogh’s work.

In only a couple of hours, For No Good Reason gives viewers a close look at the life, career, and mind of Ralph Steadman. In many ways, art is a silent scream for change in our society, and that is the exact purpose that Steadman’s work tries to serve. From satirical comics and caricatures to more colourful and ambiguous pieces, one cannot look at a Steadman piece without looking for a sociopolitical context.