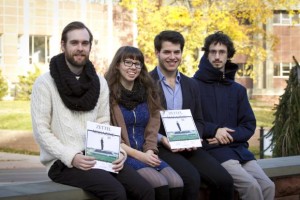 Literature, photography and art enthusiasts may now enjoy the second issue of Zettel Magazine, which was recently released by Sackville’s Underbridge Press.

Elijah Teitelbaum, Founder and President of the Press, described Zettel as “an interdisciplinary arts and culture magazine which is grounded at Mount Allison, but has an international scope.” Each issue focuses on a different theme, which is explored in different forms throughout the magazine, including poetry, prose, essays, photography, paintings, and drawings, among others. Zettel’s recent release is united by the theme of space.

“You can see, especially in the latest issue, what you have is a broad range of content, but content that’s in-depth and engaged,” said Teitelbaum.

Executive editor Alexi Katsanis also spoke to Zettel’s diverse yet thematic content. “It’s always important to impose a limit, but at the same time we’re trying to capture as much as we can in terms of culture,” said Katsanis. “If something is good and it fits into with what we’re doing, and we deem it to be what we’re looking for, then there’s no reason not to take that into account.”

Zettel was originally inspired by the lack of exposure for art and writing created for a class. Once a work is submitted to a professor, the professor is often the only one to see that work. Although the magazine originally focused on unexposed student work, Zettel now invites all artists and writers to have a vision, create that vision, and feel comfortable enough to show it to the world.

“Part of what Zettel was trying to do in its original days was to be able to take that feeling and channel it into something that everyone could see,” said Katsanis. “As time progressed, we changed what we wanted to do, and there was just a natural, fluid evolution into what we do now.”

Any artists who want to share their work can submit to Zettel through an online submission process. This is not limited to Mount Allison or to Sackville by any means: Zettel publishes work from other parts of Canada, the United States, and around the world. For example, the cover image for their second issue was submitted by a photographer from Denmark.

Zettel managing editor Emma Bass explained that they are not extremely picky when it comes to considering works for the magazine, and that artists of all skill levels are encouraged to submit their work if they feel comfortable.

“With Zettel, it’s not super exclusive or the cream of the crop,” said Bass. “In the second issue, there was a Danish photographer who has won several awards next to student work from Mt. A. It’s more of an equalizer than a way of comparing.”

Outside of the regular publications, Zettel actively tries to have a large presence on campus and in the Sackville community. Starting in November, Zettel will host a monthly art workshop series. Rather than signing up and paying for more exclusive workshops, these sessions will be free and accessible to anyone who wants to learn a new art skill.

According to Teitelbaum, Zettel started less than a year ago, and hopes to eventually become a triannual project. The magazine recently concluded their submission process for Issue 3, which will have the theme of Senses and Sensing. Issue 2 is available for purchase at Tidewater Books, Black Duck Café, and on the Zettel website.