Forging connections at the enterprise foundry 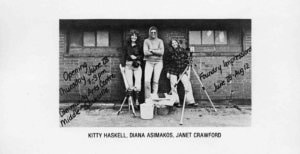 Ten years ago, it was commonplace to see Mount Allison fine arts students traipsing down Lorne Street with 35-mm cameras around their necks. They would pass the train station and approach the Enterprise Foundry with captivated caution, attracted to the long brick buildings with high windows where men poured molten iron into century-old moulds. The foundry represented an industrial side of Sackville that was as foreign to the students as the University was to the foundry workers.

Almost 150 years earlier, Mt. A and the Enterprise Foundry, one of two foundries in town, were established within a span of 20 years. Sackville, until then a shipbuilding and farming community, became the site of two diverging economic and cultural realities. As the University expanded – attracting more students, professors and artists to the town – so did the foundries, which eventually employed over 900 workers and became the largest private producers of cast-iron stoves in Canada.

Local churches provided a shared site of worship for the estranged communities until the mid-20th century, when the Sackville parish began to decline and Mt. A decided to construct its own chapel. Without the regular congregations, interactions between the two communities became infrequent and increasingly uneasy.

Paul Boggard, a member of the Tantramar Heritage Trust and former philosophy professor, remembers when the University closed the York Street entrances to Convocation Hall and the Owens Art Gallery, leaving both buildings with doors that only opened onto campus. 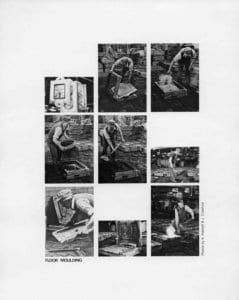 “We don’t have the fence anymore, but when I first came to Mount Allison we had a fence with steel prongs, sharp tipped, going up York Street, telling you to walk up the sidewalk but by God stay off of the grass,” said Boggard.

In 1975, artists Kitty Haskell and Diana Asimakos, in conversation Owens Art Gallery director Christopher Youngs, recognized a lack of community involvement at the Owens and a need for more off-campus art education. After securing government funding and tacit support from the Owens, Haskell and Asimakos established the Sackville Community Arts Centre at the former elementary schoolhouse in Middle Sackville. The centre held night classes for adults, a community gallery and a partnership with Marshview Middle School.

Janet Crawford, filmmaker and owner of Fog Forest Gallery, got involved with the Centre in its first year of operation. She helped establish the field studies program with the middle school, where students in Grade 6 travelled throughout the Tantramar region using art practices as a way of exploring and learning about their community. “Our philosophy was to understand in-depth the things that were right beside you [through a process of art-making],” said Crawford.

In the third year of the field studies program, the centre arranged a year-long foundry field studies project. Once a week, a group of 12-year-olds visited the Enterprise Foundry, where they explored the buildings and observed the workers. Their experiences at the foundry inspired art in a variety of media that was shown in the Community Arts Centre gallery upon completion of the project. 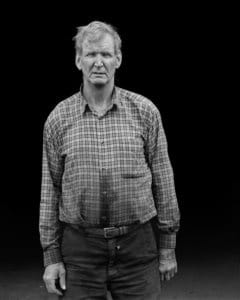 “These kids were going through the foundry and they were seeing their dads working on the assembly line. The pride that would come out with those kids was incredible,” said Crawford. “They finally got a chance to see the environment that their parents worked in.”

Following the conclusion of the foundry field studies project, Crawford, Haskell and Asimakos decided to continue making work at the Enterprise Foundry. “We were just dumbstruck by it and started to get really excited about exploring it, not as teachers of 12-year-old kids but as artists ourselves,” said Crawford, who grew up in Sackville but had never entered the foundry until working with the program.

The three artists decided to focus on the moulding shop, where the iron components of the stoves were cast. The work, consisting of photographs, sculptures and a film, eventually came together in a catalogue and an exhibition, Foundry Impressions, at the Community Arts Centre gallery. Crawford remembers some of the foundry workers attending the exhibition’s opening reception.

“One of the reasons that the three of us got interested in the moulding shop was not only because the environment was so dramatic but the work that was being done there was historic,” said Crawford. “You had these men performing this work by hand. They’re working with things like sand and hot molten iron and depending on how well they had been trained, they could turn out a really well crafted piece of cast iron that would go into making up a Franklin stove or a furnace.”

The artists were also fascinated by the mould patterns that shaped the iron. “A lot of these patterns were created when the foundry first started in the mid-1800s, so they’re very flowery,” said Crawford. “They had really interesting designs carved into the original wooden patterns which were created in the Victorian era.”

Barbara Sternberg, a filmmaker and subsequent co-founder of Struts’ artist-run centre, was involved with the Community Arts Centre and an instructor for the foundry field studies project.

“Art shouldn’t be made in a vacuum,” said Sternberg. “We saw that in Sackville there were two worlds. There were the townies – the local people – and the university people. So the kids in the public school were children of the university professors or children of local fishermen, local farmers and a lot of them worked in the foundries. We wanted to use the art project to bridge those worlds.”

Like the other instructors, Sternberg continued to make work at the foundry following the completion of the middle school project. In 1979, she completed Opus 40, a film that focused on interviews with workers and repetitive images of the casting process.

When Opus 40 was shown at Struts a few years later, one of the workers approached Sternberg after the screening. “He came and brought his daughter because she had never seen him at the foundry. He was really glad that [the film] was there,” she said. 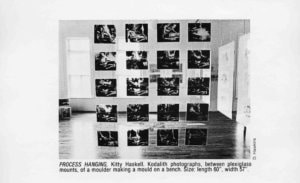 Not long after the completion of the foundry field studies project, business began to decline due to foreign competition and outdated facilities. Eventually, the Fawcett Foundry, Sackville’s other foundry, halted production. Due to heightened community lobbying, the province stepped in, brokered a deal to transfer the assets to the Fisher family, who owned the Enterprise foundry, and sold the land to Mt. A for one dollar. The Fawcett Foundry facilities, located at the corner of Main and Salem, were demolished and burned in 1986. The site currently exists as a University parking lot.

The Enterprise Foundry continued to produce stoves for another 25 years, though in a progressively reduced manner. Darren Wheaton, the last owner of the Enterprise Foundry, remembers students and artists photographing the foundry in its final years of operation.

“We’d always have someone coming down once or twice a year,” said Wheaton. “We tried to have a good working relationship with the University and accommodate them when they came down, though they had to work around our schedule.”

Wheaton recalls doing custom moulding jobs for local artists as well as working with Mt. A sculpture students in the early 2000s. He also rented out studio and storage spaces above the foundry offices for artists, including the former head of the fine arts department, Thaddeus Holownia.

Evan Rensch, a graduate of the Mt. A fine arts program, began taking pictures of the foundry with a large viewfinder camera the year after his graduation in 2006. Although Rensch had spent a portion of his childhood in Sackville, his family did not have a personal connection with the foundry. “If anything, my fascination with it was how foreign it was to me, to my experience,” he said.

“I became addicted to the place and I would photograph there, when I was in town, a few times a week. I’d keep showing up and over the course of years they grew to just accept me,” he said. “They gave me a nickname. For some reason they started calling me Angus.”

For five years, Rensch documented the Enterprise Foundry. At first he was hesitant, focusing primarily on the architecture of the space, but eventually he asked Roger Oulton, a worker in the moulding shop, if he could take his portrait in 2010. Over the next two years, Rensch completed a portrait of everyone who still worked regularly at the foundry. He shot the final portrait in the fall of 2011. A few months later, in January 2012, there was a fire at the Enterprise Foundry and the plant never reopened.

When the foundry shut down, most of the workers were retirement age, although Wheaton said some of the men continue to work odd jobs around Sackville. “They were established in town so they would have stuck around,” he said.

In the year following the fire, Rensch produced a catalogue and exhibited the 22 nearly life-size portraits at the Owens in a show entitled Enterprise. Rensch remembers most of the workers attending the show: “It was one of the better attended shows at the Owens in a number of years.”

“The foundry is so entrenched in the identity of the community still that a lot of people came to see the show that probably wouldn’t make a concerted effort to see any show at the Owens,” Rensch said. “There are kind of two streams without a lot of overlap [in Sackville], so to bridge those was a satisfying aspect of the work.”

Wheaton attended the reception of Enterprise and said most of the foundry workers showed up at the Owens. “Most of them weren’t into the artsy stuff,” he said. “But when they saw the final project, particularly the portraits [Rensch] did of everyone, they were really taken by surprise.”

What remained of the Enterprise buildings was sold to Bowser’s Construction, a local construction company, shortly after the fire. The site is currently used to store construction debris, materials and machinery.