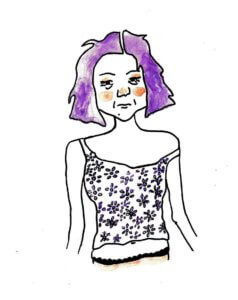 In the opening scene of Paul Downs Colaizzo’s Really Really, the audience meets two girls returning from the party of the year. Grace giggles as she deals with a bleeding hand. Leigh distantly checks her texts, calls her voicemail four times, begins to hyperventilate and finally utters a quiet, mysterious: “Ow.”

This moment, this contrast between total happiness and utter pain, this mystery, is perhaps the best sampling of the show as a whole, which runs until Saturday at the Motyer-Fancy Theatre.

“It’s a very cutthroat play about a group of university students and the lengths to which they will go to achieve the life that they’ve been told they want,” said Kennedy Longaphie, who plays Grace, roommate to the main character Leigh. Without giving too much away, the play also tackles topics of privilege, sexual assault and nepotism.

“It’s quite controversial,” said Kylie Fox, a fourth-year drama and music student who plays Haley, Leigh’s sister. “I think it will create a lot of discussion, dialogue, with the audience members.”

Longaphie, a second-year English and drama student, agreed. “I think it’s more of a discussion,” she said. “We can’t control what people take away from it but I hope they take away some perspective.”

To aid in this dialogue, Really Really will include “an interactive installation,” which, according to Wilson-Tyrell, will allow audience members to “take whatever they’ve just experienced and do something with it immediately after the show.”

Audience discussion is important, but student growth has been the key component to the rehearsal process. Wilson-Tyrell ultimately selected this script so “students could play their own age” and work on a play that would “test them as actors.”

“They have to be people that don’t have a lot of redeeming qualities,” she said. “That’s a big thing as an actor to do that and to fully commit to something that is not you at all.”

Longaphie echoed this sentiment. “It’s been hard to get into the mindset of a young woman who probably made a ‘Make America Great Again’ speech at one point,” she said. Despite that, “It’s been a great growing experience as an actor.”

Even though the characters can be difficult to portray and they spend much of the play in direct conflict, Fox said the cast is “like a team.”

“Because it’s such an ensemble piece, everyone has to be really supportive of each other,” she said. “That’s also a good feeling, knowing that we’ve all got each other’s backs.”

For Wilson-Tyrell, the growth of the actors has been the most exciting part of Really Really.

“There’s some talent on this stage and it is exciting when they meet the bar and then go even higher,” she said. “That is thrilling to watch.”

Really Really runs from March 7 to 10. Tickets are $5 for students and seniors, $10 for non-students. Thursday’s performance is pay-what-you-can. Tickets can be reserved by emailing [email protected]