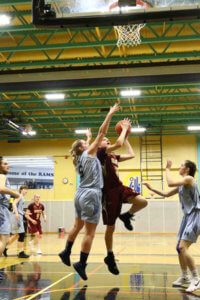 The Mounties took home the banner with a thrilling overtime victory, 77-71 in the finals over the Mount Saint Vincent Mystics. The women’s varsity basketball team went into the ACAA championships confidently despite being the underdogs against the powerful Mystics roster, who finished the regular season with just one loss.

Sarah McGeachy and Erin Steeves, seniors and co-captains of the team, talked about their big win.

“Going into the game, we knew what we had to do. We weren’t completely satisfied about the way we played in our win against Holland in the semi-finals,” Steeves said. “We knew that we had to play better in the final game.”

McGeachy added to this, talking about the game plan going into their final game: “We wanted to keep the pace going and really spread the floor and attack. We wanted to focus on the things that we can control ourselves, and not them.”

Both McGeachy and Steeves were part of the Mounties team that lost the 2015 ACAA championship game. “We weren’t expected to win the final when we were in first year, but this time we weren’t going to be satisfied with a silver medal,” McGeachy explained.

The players talked about how they have watched women’s basketball at Mt. A develop over their four years on campus, giving credit to their coach, Matt Gamblin.

“[Gamblin] has built a great program since he’s been here. We started with a team of nine recruits in our first year. He really restarted the program at [Mt. A] to build it to where it is today,” Steeves said. “Over the years there have been progressively more and more fans at our games, which shows us that our hard work is paying off.”

The Mounties were predetermined to host nationals but winning the title has given them a better ranking. Losing the ACAA title most likely would have resulted in the Mounties being ranked last, and forced to play the number one team in the tournament. With the win, the Mounties sit as the second seed in their division and will face off against the Medicine Hat Rattlers in their first game at the national championships.

McGeachy talked about how they plan on approaching the tournament: “We want to win the first game and make it to the national semi-final. Our goal is to get a medal. We think it’s extremely doable if we win that first game.”

As both McGeachy and Steeves are graduating, this weekend will mark the end of their basketball careers.

“I think that it’ll be really bittersweet, but I’m happy that we get to finish our careers on our home court in front of all of our friends and families,” McGeachy said.

Steeves echoed this message: “There are a lot of emotions going into your final games, but in the back of your head you’re telling yourself that it’s not quite over yet. Going into nationals knowing this is the end of our career is a surreal feeling, but I’m happy that it’s on our home court.”

The CCAA National Championships will take place from March 15 to 17 in the McCormack Gymnasium. Eight teams will participate in the championships. The Mounties play their first game at 6 p.m. on Thursday, March 15.