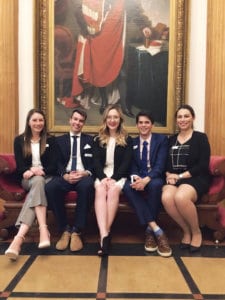 This past reading week, 16 students from four New Brunswick universities went to Fredericton to meet with provincial politicians. In those meetings, they advocated for student issues on behalf of their institutions as part of the New Brunswick Student Alliance’s (NBSA) annual Advocacy Week.

The NBSA is a student advocacy organization made up of Mount Allison University, St. Thomas University, UNB Fredericton, UNB St. John and the New Brunswick College of Craft and Design.

“We had 27 meetings. We had a meeting with the premier, MLAs, ministers and civil servants – every meeting we took was with someone who had some influence over the post-secondary sector,” noted Sara Camus, MASU president and chair of NBSA’s board of directors.

The NBSA met several times prior to Advocacy Week to construct a lobby document that they then brought into the week’s meetings.

This year, the primary issues outlined in the document addressed developing more effective policies to prevent sexual violence on campus, a yearly event in an effort toward decolonizing the academy, $225,000 to fund evidence-driven and technology-based mental health programs, updates to the NB debt relief program and $2 million to fund 200 situation-specific experiential learning opportunities.

Of the document, Camus said, “This year, we have said, ‘Alright we need to start talking about systemic issues.’ These are things that basically all students on our campuses know about, and we really felt that we needed to develop some long-term plans.”

In addition to Camus and Danica Garner, MASU’s VP of external affairs and Mt. A’s primary delegate on the NBSA board, MASU sent three student delegates: Noah Fry, Maggie Piper and Matthew Roberts. In past years, MASU primarily brought Students at Large to Advocacy Week. This year, Camus and Garner extended an invitation to all students based on an open application process. Mt. A brought the most student delegates of all the schools present.

“I am a political science student so I participated in Advocacy Week in order to get real-life political experience. These hands-on opportunities are harder to come by in Sackville,” said Piper.

Of the preparation process, Roberts recalled, “We came in, as a delegation, very prepared, and I think that affected how well, during the week, the MASU delegation were perceived. We were one of the most prepared delegations at the event.”

“The most significant moment for the NBSA as a whole was when Moncton MLA Ernie Steeves came up to us and said, ‘I will be making a motion based on [the NBSA’s] policy for sexual violence,’ ” said Garner. The motion was ultimately tabled until the following week so that there was more time to consider what the motion would entail, but Camus remained hopeful: “We are seeing action, and we started to see action even before we left Fredericton, so we are very pleased.”

However, Garner admitted, “The most exciting meetings were the ones we got challenged in.… My personal favourite moment was in a meeting with Minister LePage.” Several of the students cited that last meeting of the week, where they debated their experiential learning with Minister Gilles LePage, as their standout moment. “LePage didn’t let us go easy. Although I found some of his questions may have represented that he didn’t know exactly what we were advocating, it was great to see a politician engaged, and furthermore, it was great to see students push back with really solid arguments,” said Fry.

Reflecting on their request for New Brunswick universities to be required to develop “stand-alone sexual violence policies with specific stipulations,” Camus said. “Many schools do have policies but there are inconsistencies and things that could be done better. One big one on the Mount Allison campus, as was brought up in the last year, was that having a goldfish and committing an act of sexual violence were equitable on the demerit system scale – which has since been rectified, but things like that just shouldn’t even happen.”

When asked what kind of immediate changes students can expect as a result of this year’s Advocacy Week, Garner spoke about the NBSA’s decolonising efforts. They requested the government fund the training of one Indigenous staff person on each campus in the KAIROS Blanket Exercise. The exercise is a teaching tool that looks at modern and historical relations between the Indigenous and non-Indigenous peoples of Canada. Every student, faculty and senior administrator on campus would be expected to participate in the event once a year. “For students looking at this and thinking, ‘Oh, I don’t want to have to do that every year,’ it’s important to remember that the impact of the blanket exercise only lasts so long; after that you go back to your everyday life.… You forget. Except, you cannot forget.… It will affect you and you will learn from it in very different ways each year.”

“This year is a bit different because not all of our asks are directly financial but what we do expect to see, for instance, in the budget, is $225,000 allocated to mental health for the Association of Atlantic Universities’ mental health strategy,” continued Garner. “The responses to that were very positive; that’s not a very large sum of money to provide a very good suite of mental health programs to an entire province and it’s also not just for the institutions that are members of the NBSA.… It’s for every post-secondary institution in New Brunswick.”

Looking to the future, Camus said, “We are hoping to see legislative changes, implementations into the budget, and if we don’t see those two things we are hoping that, bare minimum, some of our asks will make it into party platforms during campaigning for the [September 2018] election.”

Camus and Garner will also be attending the Canadian Alliance of Student Association’s (CASA) Advocacy Week to fight for student issues at the federal level at the end of the month.

A full copy of NBSA’s Advocacy Week lobby document, Mandating a Better New Brunswick, is available on their website, nbsa-aenb.ca