Black Duck café back in business 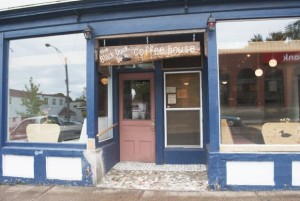 The Black Duck café has reopened after a three-week closure. The hiatus was prompted by the Sackville Town Council’s decision to revoke their sidewalk permit.

Co-owners Sarah Evans and Alan Barbour reopened their café, The Black Duck, on Monday September 30, to the relief of patrons after fears that the café may have closed for good. Barbour said that they closed shop to take time off and re-evaluate their business in Sackville after council’s decision to revoke their patio permit.

A post on the Black Duck’s website states that the mayor and council received over a hundred letters from the cafe’s supporters. During the closure dozens of supportive notes were stuck to the cafe’s door. “Thank you so much for the outpouring of love and support!” said a previous post. On the site Barbour and Evans thanked their supporters and said they were “amazed” by the response to the closure.

The Tantramar District Planning Commission declined comment on the re-opening of the Black Duck café.

Although Evans and Barbour had eventually hoped to expand their café in a way that utilized all of the building’s space, they have had to do the opposite, and shrink the scale of their operations. Some of these ideas included turning the café into a restaurant, or utilizing the rest of the space above the café to make it an inn or hostel.

However after the last two weeks these ideas of expanding have been abandoned after what Barbour describes as harassment and penalization from the Town Council. Evans and Barbour received information from the Planning Commission about their patio being non-compliant, this was followed by inspection visits and finally the permit revocation.

Sackville By-Law 231 on street traffic, Schedule A, titled “Town of Sackville Sidewalk Cafe Operating Procedures” states that in order for an application for a sidewalk café to be approved it “must be separated from pedestrian traffic with an approved fixed and sturdy barrier.”

Though the Black Duck did not have this barrier, they did put up a rope. It was still deemed not compliant by the commission as The Argosy reported on September 11. After numerous visits, during which the Black Duck was deemed noncompliant, the Town Council voted to revoke the patio at their September 9 meeting.

As far as Barbour is concerned, it was not an issue of compliance. He believes the problem is not the by-law, but stated that there is unnecessary attention given to his establishment and that the planning committee has many other issues that are not being dealt with. He claims that there was a sort of “political activity” that took a  “concentrated effort” he believes is rare compared to other planning committee operations.

Michael Fox, a Mount Allison University professor specializing in community planning, brought a different perspective. Fox said the planners are “simply putting forward what is approved [and] … submitted by the Town Council.” In Fox’s experience, Sackville has had a “professional and fairly good planning commission”, noting that the commission has dealt with “five or six patios and by and large it is a straightforward process.”

Feeling harassed, Barbour is no longer keen on growing his business in Sackville, and said he has brought forward complaints to the planning commission and By-law officers, and stated that they have prompted no action. Barbour also highlighted the difficulty in sustaining a business in rural Canada, saying that without the patio his usual three full-time employs cannot be increased to six in the summer months. New Brunswick had a 10.7 per cent unemployment rate this past summer.

Though there is need for employment opportunities all over the Maritimes, Fox warned that changes on the part of the planning commission will not reverse what he sees as the “larger economic issues of the day since 2008.”  He pointed out that the Town Council has had no Economic Development officer for the past year.

The Economic Development office is designed to support economic developers in the community while remaining familiar with the council and town by-laws. This role may have been helpful in averting conflicts like this which both Barbour and Fox agree could have worked out better if there was more communication and negotiation between both parties.