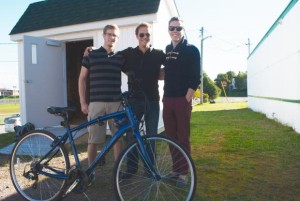 After two years of planning and work, the Mount Allison Students’ Union Bike Co-op has officially launched. The launch was a brief event on September 27, led by Vice-President, External Affairs Ian Smith, and attended by the MASU Executive, several councillors, and a few students.

While the Friday event marked the official opening, bikes have been available for rent since the beginning of this academic year.

At the site of the co-op shed behind the Athletic Centre, Smith thanked the various sponsors of the program, when he said that “the only part Mount Allison students have paid for was the shed.” On top of the donations from various businesses, “the rest of the bikes inside were provided by the RCMP.”

The support from businesses included a donation from EOS Eco Energy, a grant from Renaissance Sackville “covering the entire cost of the bikes”; a gift card donation from Mountain Equipment Co-op, which went towards accessories; and Consolvo Bikes in Moncton for what Smith called “incredible price on the bikes.” The five new bikes, bought from Consolvo, are of a high quality, and Bike Co-op Coordinator Graham Muise described them as, “so smooth.”

Smith pointed to Michael Watkins, the MASU Vice-President, Campus Life two years ago, as the initial driving force behind getting the co-op funding through referendum.

“I’m really excited for everything in this project coming together,” Watkins said.

He continued that two years ago, the RCMP provided the initial idea for the project: “They came to us one day, saying ‘We have all these bikes lying around that have come to us through various ways, […] do you want them?’”

Upon hearing the announcement about the official launch, students flocked to book the bikes for the evening of September 26. Immediately following the launch, all of the functional bikes were in use. The service is open to all students, university staff, and residents of Sackville.