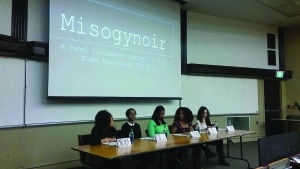 More than 40 students and professors attended a panel last Wednesday, March 9, hosted by the Black Students for Awareness and Togetherness (BSAAT). The panel explored the concept of misogynoir, a term coined by the queer black feminist Moya Bailey to describe the unique racialized sexism faced by black women.

The five panellists, all executive members of BSAAT, expressed their frustrations with dating in a white-dominated space, explored the concept of hair as a political site and critiqued the recent student mobilization in support of the women’s and gender studies (WGST) movement.

The panellists said the goal of the panel was to encourage self-critique and open discussions about racism on campus.

“Our main focus was for people to self-reflect on what was said – to be more self-critical when it comes to interacting with the black community,” said Renelle John, a modern languages honours student and BSAAT executive member.

In an interview after the discussion, the panellists explained this call for self-critique is often taken as a personal attack by white students on campus but that it should not be.

“When we discuss things it isn’t an attack,” said Malika Rogosin, a French honours student and BSAAT executive member. “When we have these discussions it’s to make sure we have a good relationship with these students. We’re just trying to make the relationship more comfortable for everybody.”

BSAAT president Dia Minors, a fourth-year double major in sociology and English, added that because of the systemic nature of racism on campus, taking corrections to language or behavior as a personal attack misses the point.

“The issues that we deal with are systemic and institutionalized,” Minors said. “For people to make it personal […] is really sad for me.”

Although executive members said they had struggled with the administration on matters of racism on campus in years past, their focus has started to shift toward the broader Mt. A community.

“Personally, last year my fight was with the administration,” Minors said. “My issue this year has now been consistently with the larger community that I really don’t think exists—at least not for me.”

Minors said, although the administration has been responsive to working with BSAAT, these are improvements, they do not adequately address the issue of racism in Mt. A culture.

“Top-down doesn’t work,” Minors said. “Trickle-down economics doesn’t work, and neither does trickle-down social liberation. It takes the larger community. There is only so much that the administration can do.”

The panel was structured in a way that pointed questions from a moderator were interspersed with questions from the audience. An audience member asked the panel for a specific example of their erasure from campus culture. The panellists all looked at each other and nodded: They pointed to the reaction to the WGST funding cuts as an example of misogynoir on campus.

The BSAAT executive members said that although they drew attention to a racist incident on campus last year, they did not experience the same type of support from student activists.

“In that response I saw people who were angry and stood up for what they felt was right,” said Minors. “Yet going back to last year, those same people were telling me that it wasn’t right that I called the CBC, or that we were making too big a deal out of it.”

“To me it’s not really a toss-up of which one is more important. They are two different issues,” said BSAAT vice-president Laurin Davis, a third-year sociology student. “But one got completely shut down, dragged through the mud, and then another got 7,000 signatures.”

“The reaction was knee-jerk with not a lot of self-reflection,” John said.

The members of BSAAT said without the willingness of white students to acknowledge and learn about racism, as well as unlearn harmful racialized perceptions, misogynoir will continue to inform the experience of black women on campus.

“We have a community, a culture that doesn’t let black people air their grievances in a way that doesn’t demonize them,” Minors said. “I’ve seen nothing change really in a way that I am happy with, and I hate thinking that there is another person out there is going to go through the same things I went through.”

BSAAT meets on Thursdays at 6:30 p.m. in room 125 of the Wallace McCain Student Centre.