Building cities for women, by women 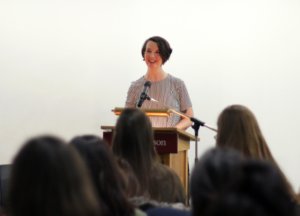 On Jan. 13, Dr. Leslie Kern launched her new book, Feminist City: A Field Guide, to a packed audience in the Owens Art Gallery.

Kern is an associate professor in the geography and environment department and the director of the women’s and gender studies department at Mount Allison.

Feminist City draws from Kern’s experiences as a young woman coming of age in the busy bustle of Toronto. There, she was introduced to both the discomforting emblems of city life and the excitement and promise that the city holds: “I learned to deal with the all-too-common unpleasant aspects of city life for women, such as street harassment and fear of violence, but I also found a sense of autonomy and freedom.”

Kern’s work as a feminist geographer is concerned with power and its presence in physical spaces. Kern described feminist geography as a field that looks at “how gendered norms are ‘built into’ spaces such as cities, but I also think about inclusion and exclusion more broadly across a wide range of identities and differences like ability, race, class and sexuality.”

Later in her life, when Kern had a baby in London, England, she was forced to confront many of the obstacles that mothers in big cities regularly face. Simple tasks like getting on the bus and walking down the street became barriers to her full participation in London city life.

Kern’s experience reflects the inherently inequitable way in which cities are set up. “Many cities have been set up to support a traditional family model with the man as the breadwinner: he travels into the city for work in a linear fashion and back out at typical rush-hour times,” said Kern. According to Kern, women tend to have much more complicated and circuitous routes through the city, owing to the fact that they are usually responsible for much of the domestic and child-care work.

For women, the problem of basic personal safety remains a major concern. A Globe and Mail examination recently revealed that almost 4,000 incidents of sexual assault or harrasment were recorded on Canada’s 22 largest public transportation systems between 2013 and 2017. Ninety per cent of these incidents were perpetrated against women by men.

Kern added that many women attempt to mitigate these risks by taking alternate routes around the city, guided by fear and “a cumbersome set of safety precautions that most men don’t bother with.”

Kern noted that, while cities all over the world face similar problems, some cities have started “gender-mainstreaming.” This means that “all policies and budget decisions have to reflect gender equity as a priority,” she explained. Kern pointed to Vienna as an example of a city that has effectively listened to women in the municipal policy process. The city has altered street lighting, parks, pavement and social housing to better serve women’s needs.

Feminist City insists on an intersectional approach to city planning. Kern warned that “even well-meaning feminist interventions” can have harmful consequences for other groups. “For example, safety initiatives that focus on increased policing, cracking down on the drug trade and removing people like sex workers and the homeless might make the streets ‘feel’ safe for white, privileged women, while making the city much less safe for those subject to increased criminalization,” she said.

Although Feminist City is not necessarily meant to be a prescriptive text about city planning, Kern’s “perfect” feminist city must, at minimum, “decentre the patriarchal nuclear family and make room for other kinship relations.” Kern called for profound structural change, emphasizing that the needs of the most marginalized must be placed at the centre of activism and policy-making. “We can’t design-out sexism and harassment,” she said.

After completing an Honours B.Sc. and an MA in sociology and equity studies in education, Kern went on to complete her PhD at York University in women’s studies.

When not teaching, writing or researching, Kern is a career and life coach for academics. She works one-on-one with faculty and grad students on problems such as stress, burnout and imposter syndrome. She also helps facilitate a book club at the Dorchester Penitentiary and volunteers on the board of the Autumn House, a domestic violence shelter in Amherst, N.S. Among her many other awards and distinctions, she was recently recognized as one of Evergreen Canada’s Movers, Shakers and City Builders to Watch in 2020.