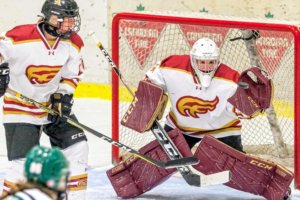 Still time for Mt. A to clinch a playoff spot

The Mounties women’s hockey team played two back-to-back games in Sackville this past weekend. On Jan. 10, the team fought for a win against Université de Moncton but fell just short, losing in overtime with a final score of 3-2. On Jan. 11 the Mounties defeated Dalhousie in a close game, with a final score of 1-0 in overtime. The winning goal was scored by assistant captain Emma Schurman.

In the first half of the 2019-20 season, the team finished with only two  wins. After the winter break, the Mounties came back strong and won against Bishop’s University on Jan. 4 with a final score of 2-1. The Mounties have won two out of the three games they played so far this semester.

The team doesn’t plan on staying in last place in the Atlantic University Sports standings for much longer.

“We have spent most of the season up until now without a full lineup and having the injury bug hit our team hard,” said head coach Terry Rhindress. “The team has faced adversity with the injuries, but that hasn’t stopped the rest of the team from competing and working extremely hard. As a team we believe we will have to be healthy, compete the same way in the second half of the season and work hard to get the last playoff spot.” With eight games left in the regular season, the Mounties will have to keep up the same momentum they’ve been proving so far in 2020.

Mount Allison’s department of athletics and recreation announced fourth-year defence player EmmaRae Murphy as Joey’s Female Athlete of the Week for the week of Nov. 25 to Dec. 1.

“Being named Athlete of the Week is an honour. The school is filled with tremendous athletes and the award is greatly appreciated,” said Murphy. “The award is a direct reflection of the hockey team itself and the hard work and determination all players have been applying.”

As the season approaches its end, the Mounties are preparing to fight for a playoff spot. “This semester we are pushing for a playoff position. We are confident in our abilities as a team and everyone is on board to reach the same goal,” said Murphy.

As an upper-year player, this isn’t Murphy’s first time preparing for playoffs. “Being one of the upper-year players on the team I’ve been able to learn a lot from the younger players coming in,” she said. “Their determination to win and make the team better is inspiring and it has made our team a tight-knit group.”

“The girls and coaching staff were so nice and supportive at the start of the year, making the adjustment from high school to university really good,” said first-year Rachael Carson. “It was hard to be so far from home in the beginning, but the team really helped me take my mind off of it.”

“The biggest adjustment for me was coming to a place where I didn’t know anybody,” said Lucy Newman, another first-year student on the team. “Once I found my group of friends and became closer with the team it’s been like my home away from home!”

One thing the team can always count on is their dedication to the sport and their shared love for Mt. A. “Being so close to making playoffs makes it even more exciting to play and put every last bit of effort to get that spot,” said Newman. “I came here to play hockey and to take advantage of the school’s high academic reputation.”

Carson felt the same way about her decision to commit to Mt. A: “I decided to come to Mt. A as soon as I stepped on campus. I really wanted to keep playing and after meeting the coach and a few older players it was an easy decision.”

The Mounties will face Dalhousie again in their next game on Saturday, Jan. 18 in Halifax.