Campus’s new building is loved but has flaws 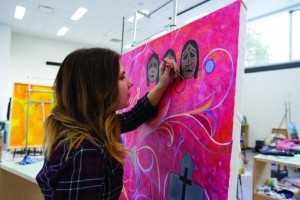 Students and faculty in the fine arts  are happy to have found a new home in the Purdy Crawford Centre for the Arts, despite still settling into the new space.

“Having come from the basement of Hart Hall where the sculpture studio used to be, this is worlds and worlds of improvement,” said sculpture and drawing professor Adriana Kuiper. “In terms of things like scale, students are making bigger work now because they can and that’s part of what sculpture is about: scale, or being able to walk around something and not necessarily hanging it on a wall, or pushing it up against a wall.”

“Everyone keeps saying it’s such a big building for such a small faculty, but back in the Gairdner, we were always tripping over each other and there would be a lot more disputes over space,” Gunn said.

While most of the building is in use, some issues with the facilities remain. Problems with the ventilation system have prevented students from using the photographic darkroom, forcing them to travel back and forth between Hart Hall and the PCCA to develop their film.

Inglis said that the ventilation problems are not particularly unusual given the building’s recent construction.

“In any new facility, there are lots of outstanding items,” said Inglis.

The building was supposed to be fully operational for its intended September 2014 opening.

Other finishing touches, such as more couches in the main atrium, are also in the works.

The university’s goal is to have the entirety of the building up and running for September 2015.

“We can do work during the year too, but summer is a key time for anything significant to get done,” Inglis said.

With students often cutting through the building, the Purdy Crawford gets more visitors than the Gairdner did. Fine arts students have taken advantage, displaying their work in the atrium. The atrium will serve as official gallery space, and a committee of faculty members has been chosen to act as curators.

Over the years, students and faculty were able to personalize the Gairdner and make it a space of their own. This is still very much an ongoing process in the PCCA, said third-year fine arts student Hailey Guzik.

“It’s going to take time for people to learn to live in this space,” said Kuiper.

The addition of official gallery space is a step forward in making the centre a place where people are comfortable working and socializing.

“People are still pretty tentative to make their mark in this space,” said Guzik. “But I think over the coming years, it will really start to become more of a home.”