Chinese students celebrate the Year of the Horse 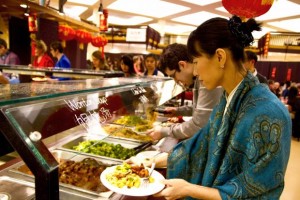 The Mount Allison Chinese Students’ Association (CSA) celebrated Chinese New Year last Friday with a banquet and show at Jennings Dining Hall. The event was well attended, featuring traditional Chinese music, performances, and food. In addition to these customary activities, the organizers even incorporated educational material into the evening for those in attendance who were unaccustomed to the holiday.

Jennings was decorated for the banquet with primarily red and yellow Chinese decorations, most of which were supplied by the Greater Moncton Chinese Cultural Association. This was the first Chinese New Year in which they collaborated with the CSA.

The staff of Jennings Dining Hall prepared many traditional Chinese dishes with the culinary assistance of the CSA. The buffet-style meal consisted of won-ton soup, seaweed salad, pork, noodle, and broccoli dishes; desert was a green-tea based dish served in an edible, chocolate cup.

Although only a portion of the sizeable dining hall was used for seating, Andy Ma, Vice President of External Affairs for the CSA, said that approximately 120 tickets were sold for the event.

While Ma and the rest of the CSA were pleased with attendance, they did acknowledge that there were approximately fifteen less attendees than the previous year.

“It’s because of the strike,” Ma said after the festivities. “Many faculty members usually attend”. In addition to the problems posed by hosting the event on campus, as opposed to the Sackville Curling Club, where it was held last year, Ma also said that many students had decided to go home from the remainder of the strike.

Still, Ma said that this year’s event was a definite improvement, especially due to the attendance of the Greater Moncton Chinese Cultural Association, whose members participated in two performances. Yi Dong, of Moncton, performed PiLiYu, a solo dance, which was later followed by XiuSe, a group dance that was choreographed with traditional fans. The group brought ornate, traditional costumes and an air of professionalism to the otherwise casual celebration.

The CSA, which was established in 2007, also played a short video in which they interviewed Mount Allison faculty and students, testing their knowledge of Chinese New Year and the Zodiac. While the answers were often humorous, the video made it clear that part of the reason for the celebration was a desire to educate the community about Chinese customs.